ACT Fibernet is increasing the rental for its broadband plans starting June 1. The increase will be implemented in eight out of the total 19 cities where the Internet service provider (ISP) currently operates. Also, the revision in the rental will vary on a plan-by-plan basis. This means that there won’t be a consistent increase in the rental for all customers. The new revision comes as ACT Fibernet and other ISPs in India are facing a huge pressure due to the coronavirus pandemic that has increased usage among household users.

The eight cities where ACT Fibernet is increasing the rental for its broadband plans include Bengaluru, Chennai, Coimbatore, Hyderabad, Delhi, Vijayawada, Vizag, and Guntur. The service provider told Gadgets 360 that the increase was two to four percent in most cities, with select plans seeing a slightly higher percentage of revision.

For instance, ACT is increasing the Silver Promo plan price to Rs. 799 in Delhi, from Rs. 749 right now, an increase of Rs. 50. The revised plan prices are expected to be listed on the company website and app over the next couple of days.

ACT Fibernet is sending an email to customers informing about the latest update. The email specifies the exact change in the rental pricing and highlights that it will come into effect from June 1.

“We have kept pricing constant over the past few years, despite significant cost increases and investments for superior Internet experience. In addition, our sector has also seen unprecedented challenges over [the] last few years, leading to increased cost of operations,” the company said in the email to its customers. 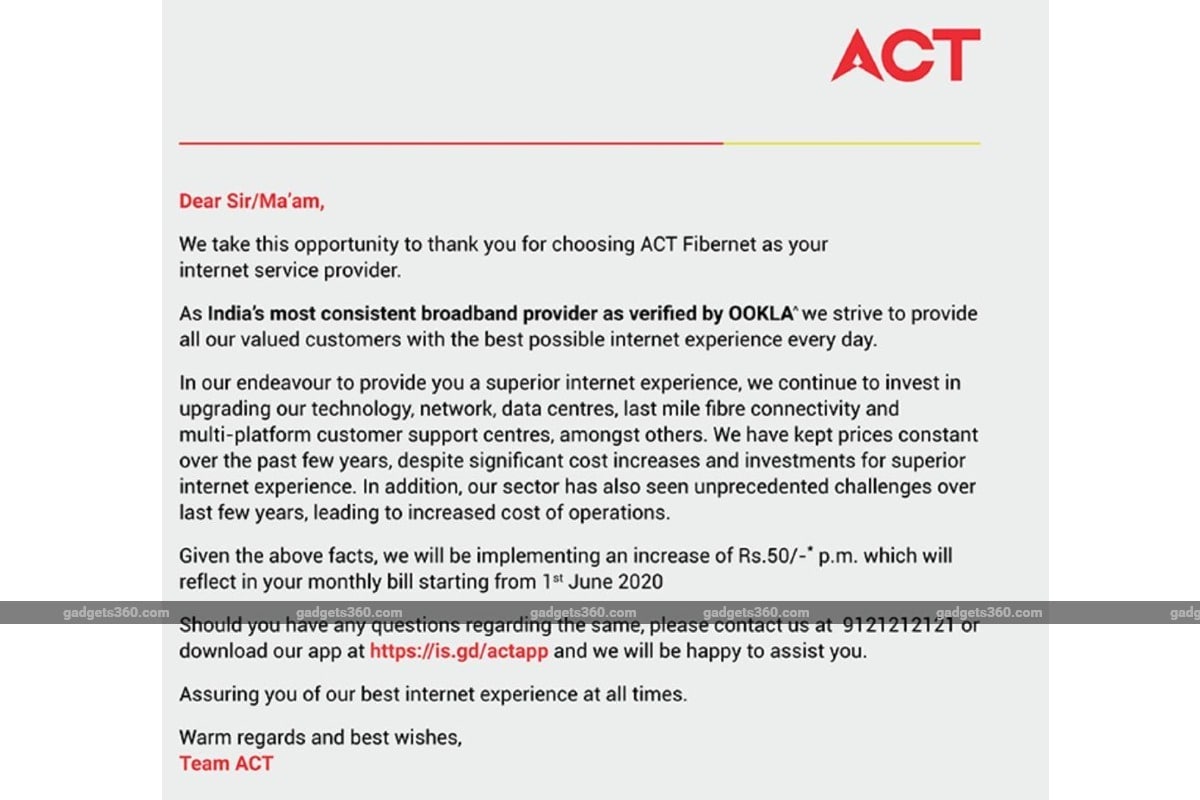 ACT Fibernet has sent an email to specify the increase

Revision comes after freebies
The latest revision notably comes after ACT Fibernet offered increased Internet speeds of up to 300Mbps speeds and unlimited fair usage policy (FUP) to all its customers in two different phases for free until April 30. The free benefits were aimed to ease working from home and help consumers stay indoors.

Earlier this month, ACT Fibernet revealed that due to a large number of people staying indoors to avoid the coronavirus infection, it saw a 40 percent increase in its peak traffic in March. The Bengaluru-based company also noticed an increase in demands across all major cities, including tier-II markets between February and April.

However, ACT Fibernet isn’t the only company that has seen a growth in traffic. Other ISPs have also seen a surge as people are relying heavily on the Internet for their work and entertainment needs.

How are we staying sane during this Coronavirus lockdown? We discussed this on Orbital, our weekly technology podcast, which you can subscribe to via Apple Podcasts or RSS, download the episode, or just hit the play button below.

Previous May 2020 in review: ‘iPhone 12’ leaked, MacBook Pro 13-inch gets the new keyboard
Next Twitter Has More Tools to Use Against Trump, if It Chooses