Apple is developing a system to alert users to physical objects when immersed in a virtual reality environment.

The Cupertino tech giant is rumored to be working on various virtual reality (VR) and augmented reality (AR) systems, including a mixed-reality “Apple Glass” headset. Although AR devices won’t obstruct a user’s view, the same can’t be said for VR headsets or experiences.

Apple has a solution. In a patent application titled “detecting physical boundaries” and published on Thursday, the company details a system that could help VR users from bumping into objects in their physical environment.

As the company points out, a VR device could completely immerse a user into a simulated environment. That would make it difficult for them to see or notice objects in their actual, real-world surroundings.

“One challenge in computer simulated reality is that, while interacting with the virtual objects displayed by a head-mounted device, the user may be so immersed in the virtual reality environment that he or she lose awareness of the physical obstacles and/or boundaries in their physical vicinity. The head-mounted device can be opaque and cover both eyes of the user in some embodiments. Therefore, the user may not be able to see (e.g., directly see) the physical environment of the user,” the patent reads.

To help avoid colliding with real-world objects, the VR device could determine the distance between itself and a physical object. 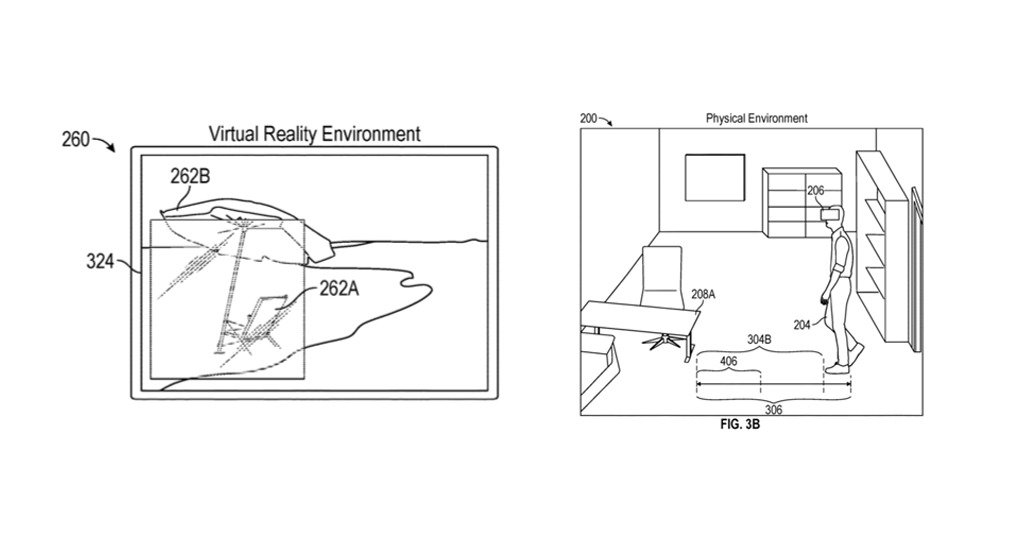 An example of the virtual view that a user might see. Credit: Apple

Apple gives the example of a glass plane effect that could appear within the simulated VR setting. That virtual glass plane, which would correspond with an actual wall or another object, could deter a user from running into the obstacle. Other examples could turn physical objects like furniture into simulated ones like a beach umbrella.

If a user chooses to ignore these virtual signals and move closer to the obstacle, the VR device could display a live image or video of their physical surroundings. That way, a user can see their environment without taking off a VR headset.

The patent application, first filed in March 2020, lists Seyedkoosha Mirhosseini, Avi Bar-Zeev, and Duncan A. K. McRoberts as inventors. None of them have been listed in past Apple patents, though Avi Bar-Zeev has worked on intellectual property for companies like Microsoft and Amazon.

Although most of Apple’s efforts have been focused on AR and mixed reality through platforms like ARKit, some reports are suggesting that a strictly-VR system could be in the works over in Cupertino.

How to use App Clips in iOS 14

Epic is saying that Apple has blocked all updates to “Fortnite” spin-off “Fortnite: Save the ...