Apple’s Mac notebook segment grew 39% year-over-year in the third quarter of 2020 amid similar increases across the industry, according to new data from Strategy Analytics.

The company maintained its spot as the fourth-largest manufacturer of notebook computers during the period, shipping a total of six million macOS devices from July through September. That period corresponds with Apple’s fourth quarter.

Apple’s 39% growth is in line with the trend across the notebook industry. Between the top five notebook manufacturers globally, the total rate of year-over-year growth during Q3 2020 was 34%, Strategy Analytics reported. 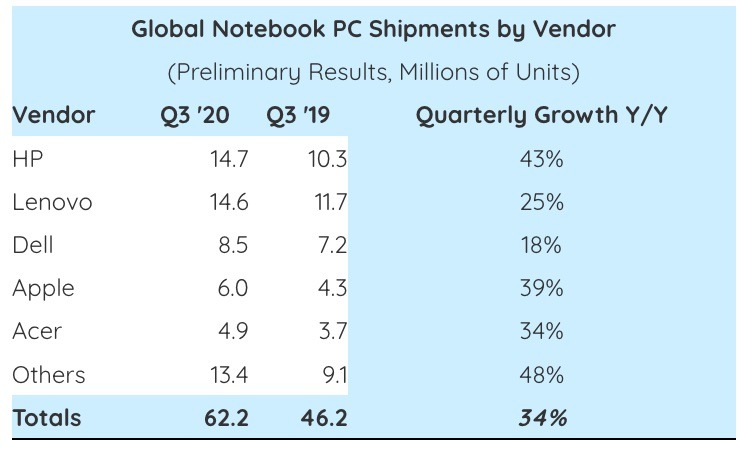 HP saw the highest rate of growth during the third quarter with a 43% increase year-over-year, which allowed it to edge out Lenovo and become the number-one notebook vendor. Lenovo, Dell, Apple, and Acer filled out the rest of the top five, in that order.

Growth during the third quarter was largely driven by new work-from-home and remote education trends during the ongoing coronavirus pandemic. During the period, vendors were actually constrained by supply issues because of the record-breaking demand. 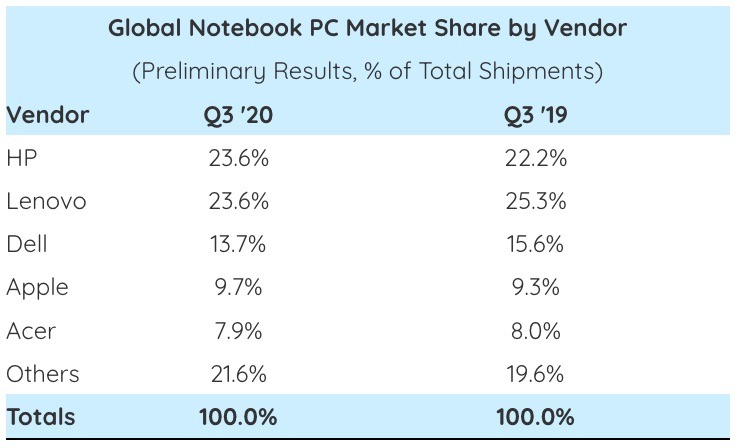 “The third quarter would have been even more productive for some vendors if they were able to deliver more devices to meet high demand. Supply will remain a key concern as demand is expected to stay high… consumers have started their purchases before the holiday season to prepare for the new ‘normal’ of working and studying from home,” said Chirag Upadhyay, a senior research analyst at Strategy Analytics.

During its Oct. 29 earnings call, Apple reported record-smashing revenue of $9 billion for the Mac during the September quarter, up 29% year-over-year. Apple CEO Tim Cook did admit that the company was seeing supply constraints across its products, including in the Mac segment.

In November, Apple unveiled a new lineup of Apple Silicon Mac devices equipped with the first-generation M1 chip. Those models are shipping out to customers as of the week of Nov. 16.

The Nebula Astro Portable Projector makes up for hit-and-miss software and short battery life with ...