Best cameras, lights, and mics for your work-from-home Zoom meetings

We round up the best gear to improve how you look in Zoom, FaceTime, or other video calls while you are working or learning from home.

The COVID-19 pandemic has forced many people into homebound remote-work situations, often including video chat in apps like Zoom, Skype, or FaceTime.

If this has become a frequent part of your work life, it may be worth investing in some dedicated gear so you can be presented as well as possible to your colleagues, employer, and clients. A good webcam, proper lighting, and even an external mic can help your colleagues see you in your best and most professional light.

All modern MacBooks include front-facing cameras for video calls, but they max out at a less-than-stellar 720p. Built-in cameras on your device can also limit your ability to set up your scene at an ideal angle.

For the best picture quality, you may want to look into either a dedicated webcam or a setup with a connected iPhone. 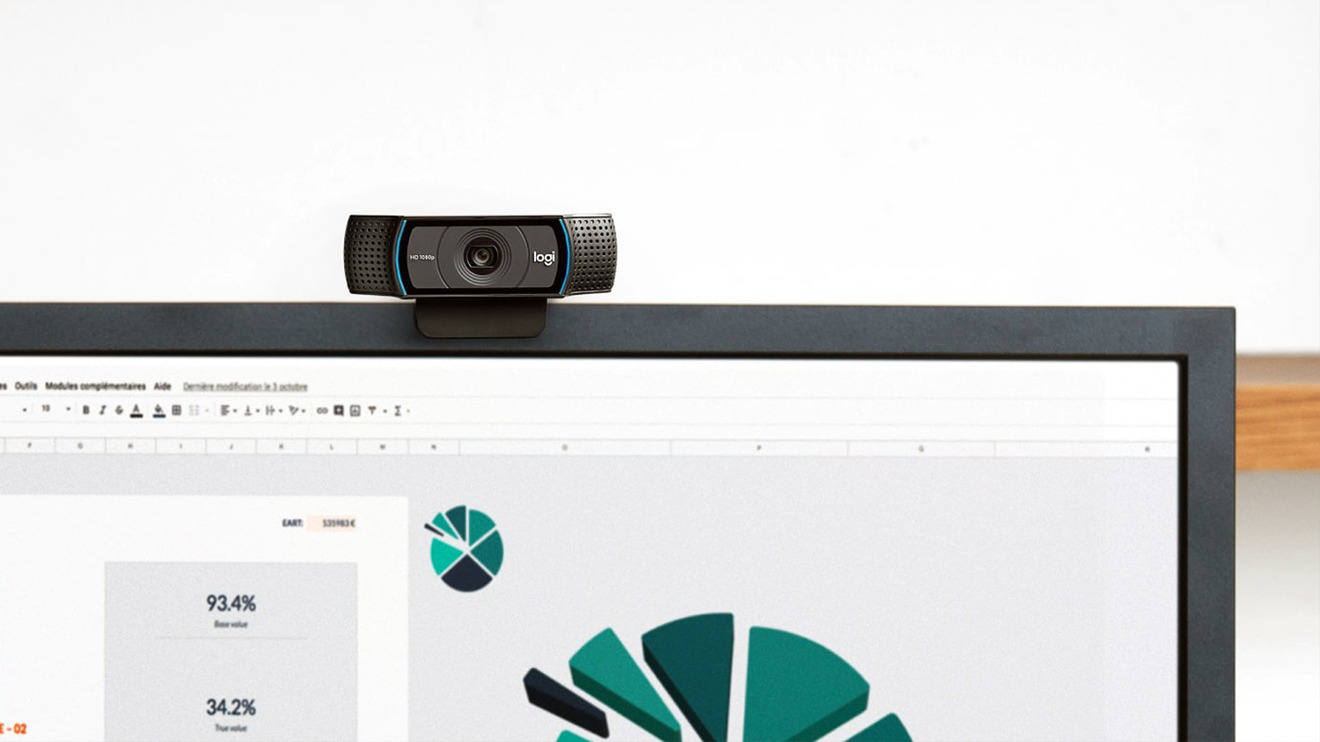 The Logitech C920 is still one of the best-value webcams more than eight years after its release. It offers 1080p widescreen video calls at 30 fps, with it including autofocus and Logitech’s RightLight feature, which can auto-adjust lighting levels.

The C920 has a dual-microphone system, one on either side of the camera. The mics capture stereo sound and can automatically reduce background noise, with the company’s RightSound feature adding echo cancelation to the mix. 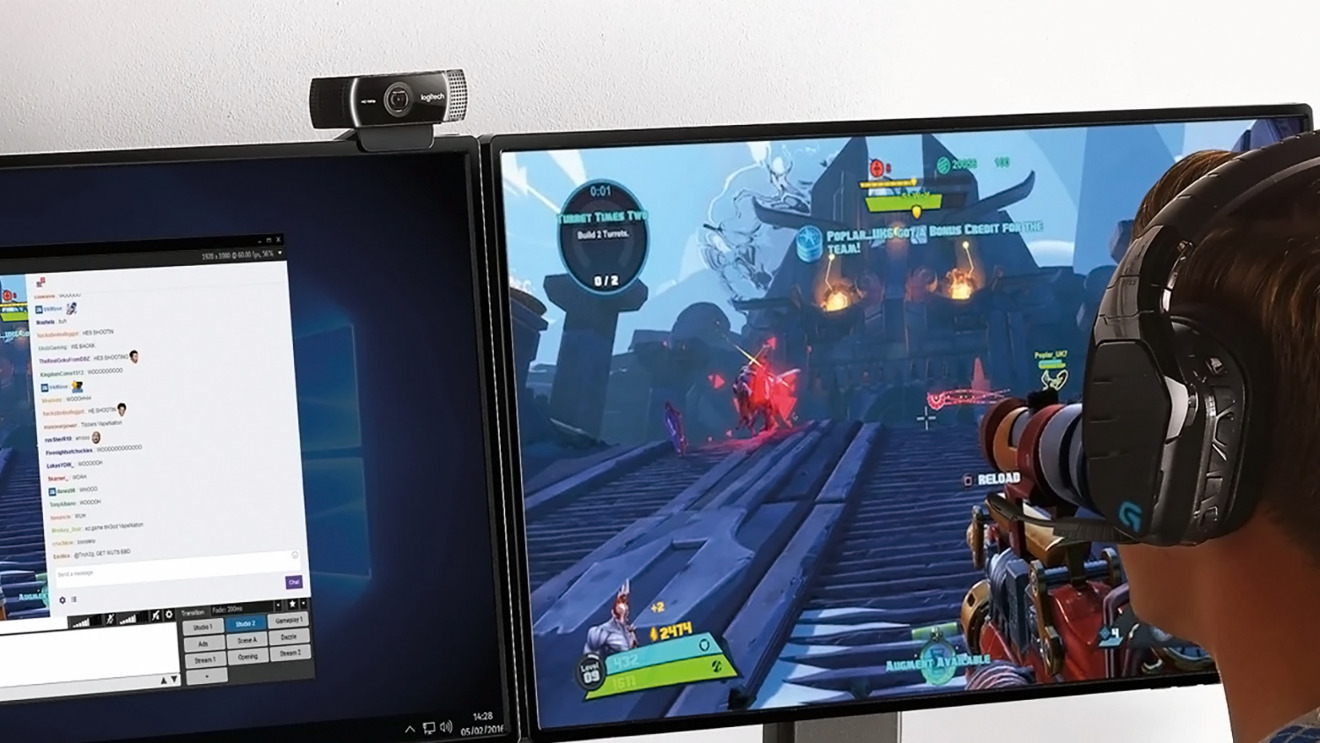 If you’re willing to raise your budget a little, the Logitech C922 is an updated model that was first released in 2016. It includes all the features and capabilities of the C920, plus a few additions.

Those perks include the ability to stream 720p video at 60fps and better low-light recording. Depending on your environmental lighting, the latter may allow you to skip purchasing separate lighting equipment. 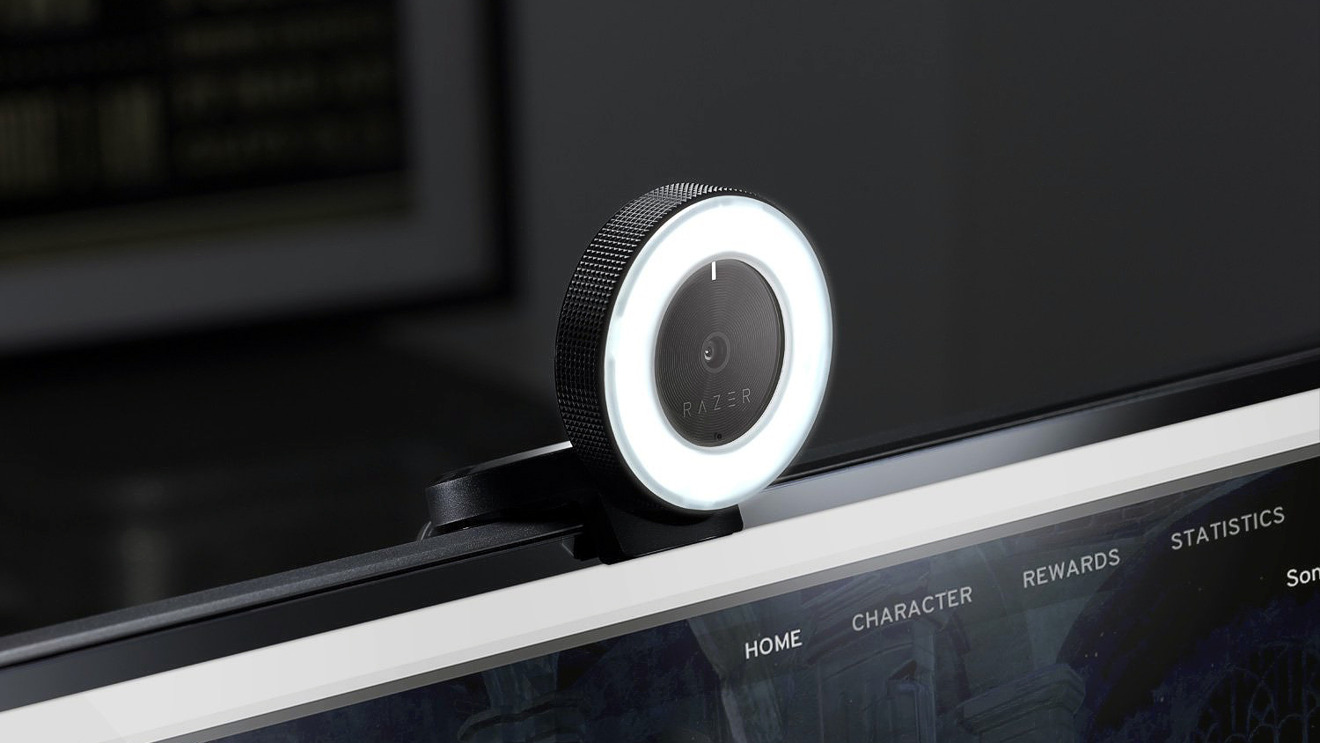 The Razer Kiyo has a built-in ring light that gives you two setup pieces for the price of one. The Kiyo can sit on your desk or clip onto a monitor or laptop display, and it shoots at 1080p at 30fps or 720p at 60fps.

One downside for Mac users is that Razer’s configuration and firmware-updating software is only available for Windows. If you don’t have access to a PC, you could use Razer’s Windows app through BootCamp on Intel-based Macs or in Windows virtualization software like Parallels as a workaround.

The camera’s default settings, which work on Mac out of the box, should fit the bill for most people. However, you’ll still want to hook it up to the Windows app occasionally for firmware updates. 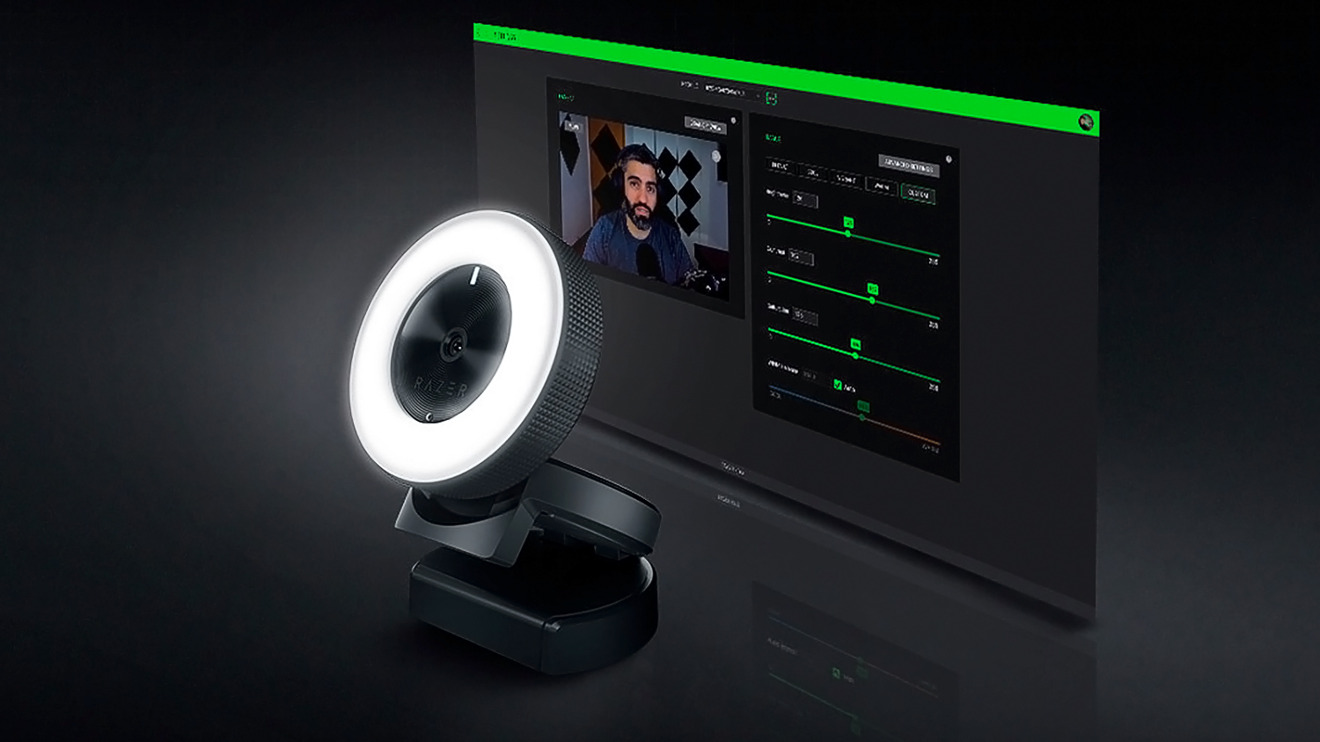 The Razer Kiyo is convenient, but integrating webcam and light into one device may not always be ideal

Glasses wearers may want to try other options before using the Kiyo, and it’s all down to its included ring light.

Since the Kiyo’s built-in light sits closer to your face at around eye level, your colleagues may see the ring light reflecting in your lenses. When lighting is mounted separately from the camera, bespectacled folks can position the light farther above, where it won’t produce such a visible glare on the camera. 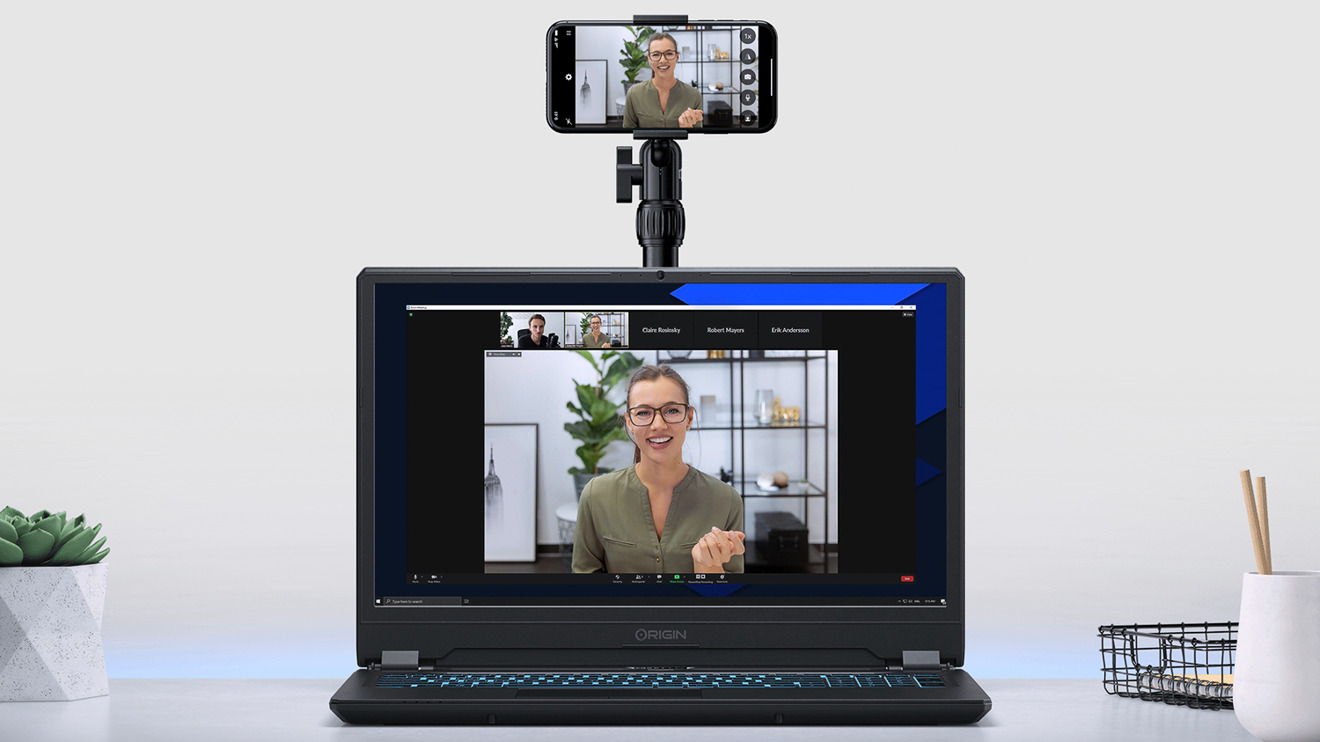 If you have a recent iPhone, utilizing its considerable camera chops may be your best bet. EpocCam is an iOS app that lets you avoid buying a dedicated webcam, by using your iPhone’s advanced camera system in its place.

After setting it up with free drivers for Mac or PC, it will automatically show up as a webcam on your computer. Once set up, it will work in both wired and wireless modes, so you can position it perfectly.

It supports all three rear lenses on the latest iPhones, as well as the front camera, with the option of using the iPhone’s flash for lighting. While the latest iPhones will produce the best picture, EpocCam works with any iPhone running iOS 13 or newer.

EpocCam Pro can even use your iPhone’s built-in microphone for audio, possibly voiding the need for an external mic.

For the best results with this setup, you’ll want to mount your iPhone, rather than standing it up in a dock or leaning it against something on your desk. Putting your handset on a tripod or other mounting accessory lets you angle your phone for the best viewing position.

Even if you’re buying mounting accessories from scratch, you should be able to keep the cost down to around $30 or less. 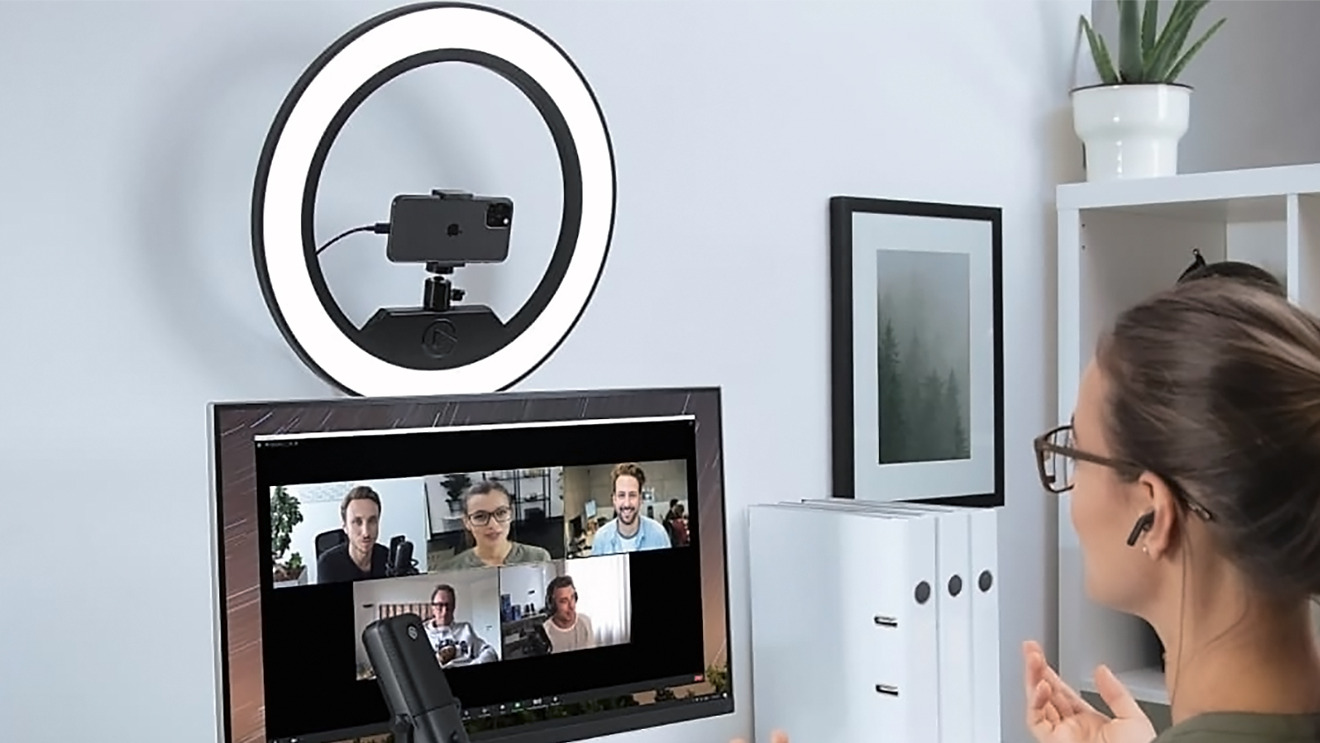 The EpocCam iOS app includes a free version and a $7.99 pro version

If you do much video chatting, you’ll quickly realize the importance of good lighting. You generally want your primary light source to be facing you, not coming from behind or the sides.

Those making calls your calls during daylight with aa window in the right spot may be fine without additional lighting equipment. When it’s an option, natural lighting can produce a pleasant picture, but sunlight’s main drawback is that it’s unpredictable and can often be too intense or not intense enough.

If you want more control over your lighting, a ring light can help out. Available in various sizes, ring lights help you avoid imbalanced lighting setups that make you hard-to-see or give you a shadowy, unflattering appearance. 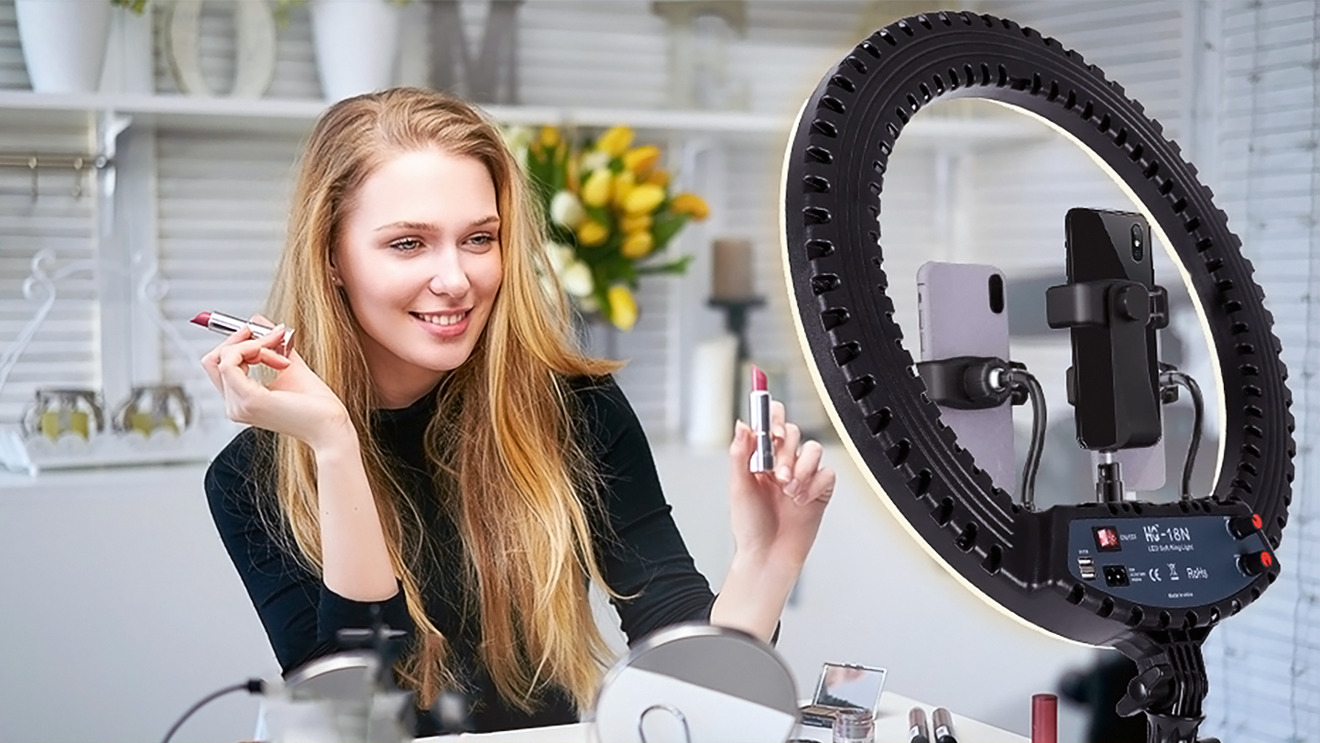 This ring light has a large 18-inch diameter to keep your entire streaming area well-lit. The included infrared remote control lets you adjust the light’s brightness and color temperature. The light’s stand can range from 22.8 to 69.7 inches.

At $89.99 on Amazon, it’s fairly expensive, so it would be best for people who need optimal lighting for a larger visible area. If you want to keep the price down, the options below can fit the bill for many people. 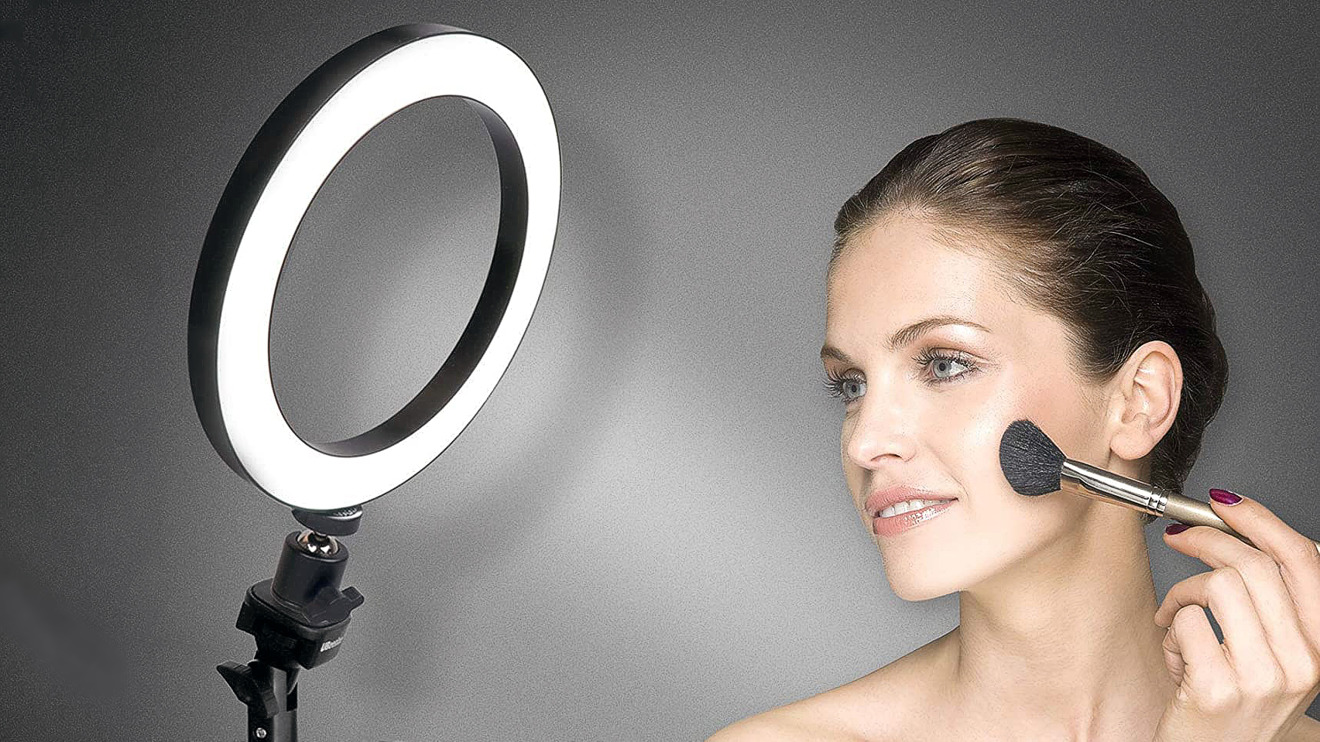 This eight-inch ring light can hit a sweet spot between pricing and size. It has three temperature modes — warm, cool, and daylight — along with 11 brightness levels.

The stand’s height can be set to as low as 17.5 inches to as tall as 51 inches, and it has a phone mount built-in. The light uses USB Type-A for power, so make sure to have a USB-C adapter ready if you’re plugging it into a recent MacBook. 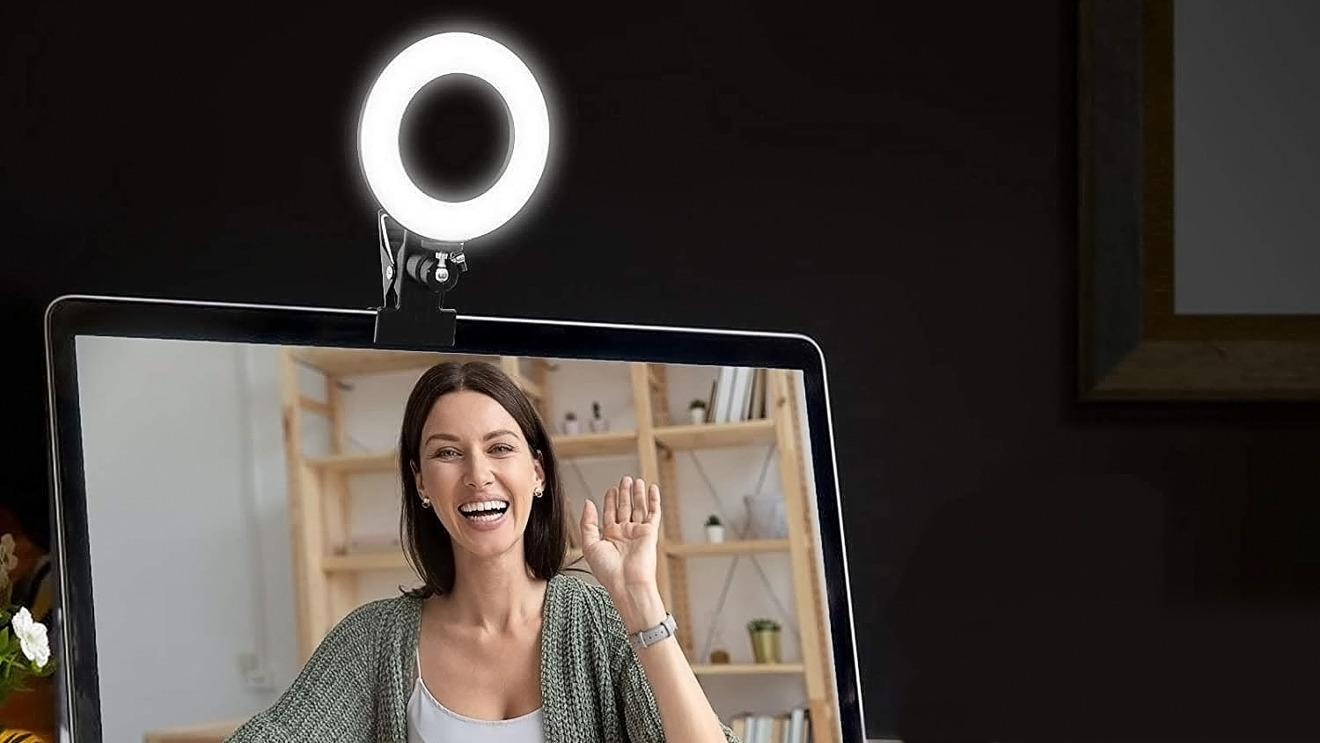 For a light that sits closer to your face, this 4.5-inch ring light clips onto your MacBook or other display types. Its cable connects to your computer via USB Type A, so again you may need a USB-C adapter for modern MacBooks.

The cable has an inline controller for adjusting power, brightness, and warmth, to finetune your on-camera appearance.

Apple says it has included multiple “studio quality” microphones on its latest MacBooks and iPad Pros. While the audio that they record is usable, it isn’t quite as high-quality as you may want.

Audio quality is important for video calls, if not more so than good video and lighting, so consider these dedicated microphones for your work-from-home setup. 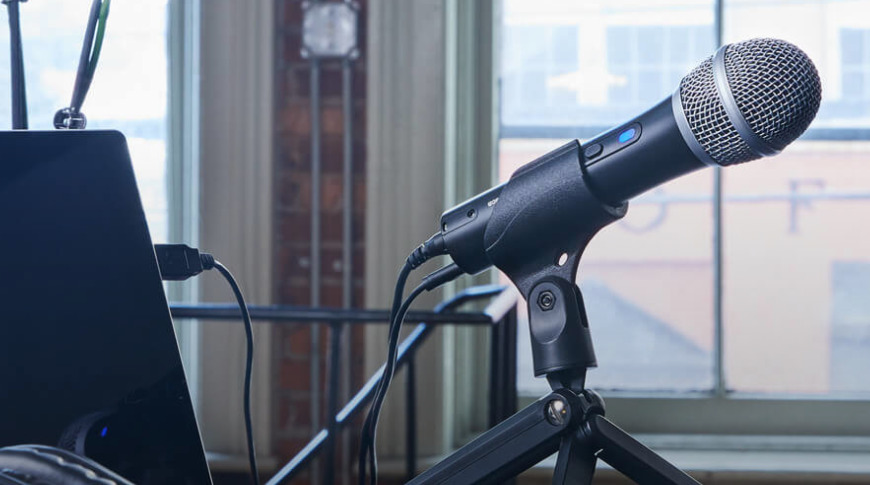 The ATR2100x is a simple USB-C microphone with an excellent price point. Choose between a XLR or USB connection, wire a set of headphones for active listening, and enjoy 24-bit audio.

This mic can be held easily or mounted using the included stand. It uses the cardioid polar pattern to prevent off-axis sound from invading the audio.

This dynamic mic will work with analog or digital interfaces and requires little power when connected to your Mac or iPad. It ships with two USB cables and an XLR cable to ensure compatibility with your existing setup.

The 192 kHz sample rate with 24-bit audio will enable high-quality recordings and futureproofs the mic as standards change. Studio mics tend to record at 96 kHz, so the extra overhead means a better recording overall. 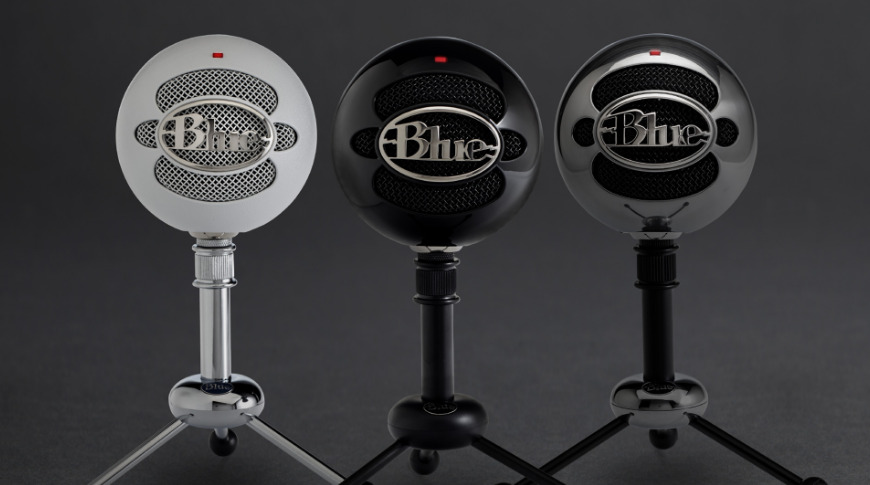 The Blue Snowball is an iconic microphone used by game streamers and podcasters alike. The popularity of the mic comes from its simple setup and decent audio.

This condenser mic plugs directly into your USB interface and works without drivers. Start your call and the mic will just work.

You can mount the mic to the tripod stand or an arm to suit your desk setup. It also uses the cardioid polar pattern to prevent off-axis sound from being recorded.

It records at 16-bit audio with a 44 kHz sample rate, which will provide more than enough quality for your meeting or class. 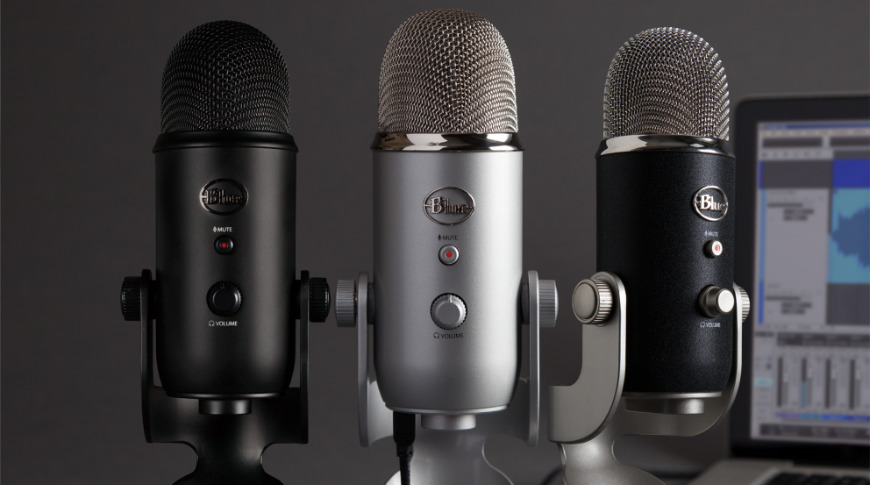 If you’d like a step up from the Blue Snowball then check out the Blue Yeti. This mic features four different recording modes for a variety of situations:

Cardioid mode rejects off-axis noise as the previous mics did. Speaking directly into the mic will produce the best results as other angles are ignored.

The Figure-8 polar pattern mode will let you and a guest speak into either side of the microphone. Off-axis noise will be eliminated as the mic only records what is spoken directly into the front or back of the mic.

The omnidirectional mode will enable the mic to record audio from any direction. This is best used when recording multiple people at once.

The stereo mode will record audio in stereo, which is great for music recordings. 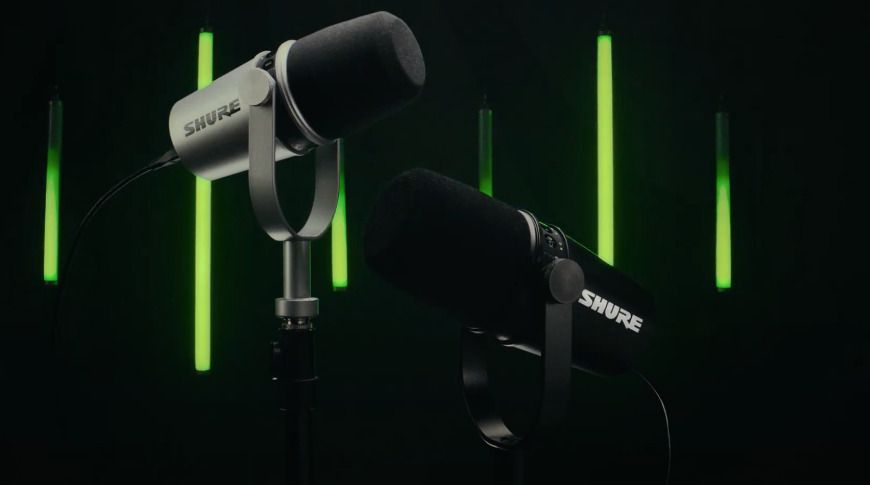 If you’re looking for something a little more high-end, then the Shure MV7 has you covered. While this might be overkill for a standard video call, it will make you sound great and be useful for other purposes like podcasting.

This dynamic microphone has USB Mini-B and XLR ports for interfacing with hardware, and it can connect to analog or digital interfaces.

The built-in pop-filter will protect against plosives without the need for additional gear, while the mic uses the cardioid polar pattern to eliminate external noise.

The mic records 24-bit audio at 48kHz sample rate. The wide bit-rate allows for a warmer recording tone, and the 48kHz signal achieves the recording studio standard for sample rate.

The 3.5mm headphone jack allows for live monitoring of your audio. The additional blend knob lets you change the mix of headphone audio, so you can adjust how much of your voice you can hear for monitoring alongside another track, such as prerecorded music for singing. 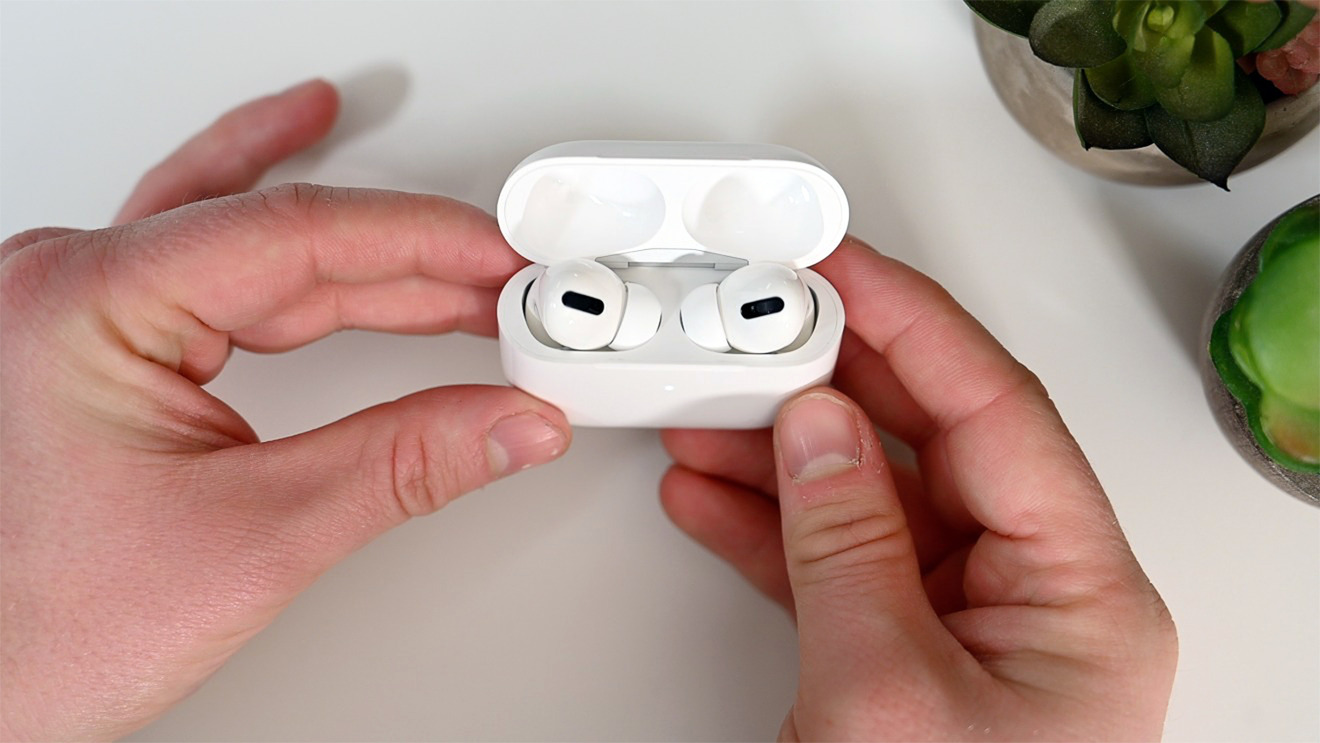 If you don’t mind wearing earphones during your Zoom meetings, AirPods have excellent microphones. They can also give your conversation some degree of privacy if family members are nearby.

Previous Apple Fixes One of the iPhone’s Most Pressing Security Risks
Next Apple’s billions, Facebook whining, and MagSafe warnings – Apple’s January 2021 in review

Review: Sketchboard Pro saves your back and neck while using the iPad for art

This week on the AppleInsider Podcast we discuss alleged renders of the 2021 iMac redesign ...