Cyberpunk 2077 was one of the most awaited games of 2020, and it turns out it’s also one of the most overhyped games of 2020, which is a fitting way to cap off the year. The first major title from Polish developer CD Projekt Red since the award-winning 2015 action RPG The Witcher 3: Wild Hunt, is nearly unplayable on the PlayStation 4 (Slim). It’s like watching a low-resolution 360p YouTube video. And despite the terrible graphics, Cyberpunk 2077 delivers a frame rate that at times feels like it’s dipping into single digits. The voice acting is really good — it’s a shame conversations are in first-person, because for all of V’s expressiveness with her voice (I haven’t played as the male version, so can’t vouch for that), it’s brought down by the fact that you can’t see her emote — but it’s lost in a visual mess.

Even a really good Netflix series is not going to be that good if you’ve got a bad Internet connection. And having failed in both the quality and performance department, Cyberpunk 2077 on the PS4 is a stop-start experience as well. Every tiny bit of dialogue is interrupted by a loading screen, which lasts for 20 seconds at least. A 30-second scene, followed by a loading screen, 40-second scene, loading screen, 25-second scene, loading screen. It’s like watching a video that keeps buffering. What amazing assets is it busy loading anyway? Cyberpunk 2077’s poor PS4 frame rate affects gameplay in turn, delaying many in-game actions such as switching the car camera or accessing your phone by several seconds. And frankly, it’s annoying enough that the game forgets your preferred camera for driving.

And that’s only half of it. Cyberpunk 2077 is also full of bugs. I’ve seen floating phones and guns (after installing day-one patch). I’ve encountered invisible weapons where your character holds out their hands like they are grabbing a weapon but there is no weapon in their hands. And I’ve worn invisible clothing where you select clothing and it’s applied but it’s not visible, leaving you looking naked even though the game says you aren’t. A hat I chose wouldn’t show up no matter what, and the game showed me as bald, with a bug even taking the hair under the hat with it. It’s hilarious on one level, but mostly very, very annoying. And oh, there is also so much texture pop-in on the PS4, even after installing the “Hotfix 1.04” that was released a day after launch. I wish the PS4 version had this much detail. Pictured: Carla Tassara as Judy Alvarez in Cyberpunk 2077
Photo Credit: CD Projekt Red

If all that wasn’t enough, Cyberpunk 2077 routinely crashes as well. In the 15 hours I’ve spent testing the game on my PS4, it’s conked off in the middle of missions half a dozen times (after day-one and hotfix, both). And there are times where you dread it’s about to crash (again), only to realise that it had temporarily frozen. Spin the camera with the right-stick and you’re bound to see it hang half the time. I’ve never had a game crash on me so much during review. If I’d paid for Cyberpunk 2077, I’d be requesting a refund from CD Projekt Red. And it’s already issuing refunds, having apologised on Monday for not showing the game running on PS4 or Xbox One before release. Had it actually shown the game, then Cyberpunk 2077 certainly wouldn’t have hit the pre-order records that it did.

This is also why the (highly-positive) early reviews were based on Cyberpunk 2077’s PC version, as console review codes were not given. I only got my PS4 code eight hours before launch. And I had to spend many of those hours downloading the game; it’s 100GB on the PS4. Strangely, it’s 60GB on the Xbox Series X, for which I got the code only on Monday, four days after the release.

Cyberpunk 2077 follows a mercenary named V, whom you can choose to play as a woman (Cherami Leigh) or a man (Gavin Drea). If you keep the nudity option on, then for some reason, the developers also decided that the character creation process should allow you to customise your genitals. There are two types and three sizes of penises, but just one vagina. You’ll also get to choose a lifepath: Nomad, Streetkid, or Corpo. That will later define the kind of dialogue choices you’ve, though for the early story bits, it’s all the same. You will meet up with local thug Jackie Welles (Jason Hightower) with whom you go on various adventures in Night City, a dystopian megapolis in North California that is now an independent state of its own.

The high point of your adventures is stealing a precious prototype biochip that gets damaged in the ensuing escape and you have to slot it in your head to protect its data. It turns out to have the soul of a former rock star turned terrorist Johnny Silverhand (Keanu Reeves), who has been believed dead for half a century. Owing to circumstances, Silverhand’s soul starts rewriting your memories and essentially taking over your body. Meanwhile, Silverhand becomes your companion, like a voice in your head and the devil on your shoulder, pushing you towards self-serving choices. That existential quest spurs the narrative as there’s a ticking bomb attached to it, though given Cyberpunk 2077 is an open world game, you’re free to explore the world without worrying about collapsing any second. 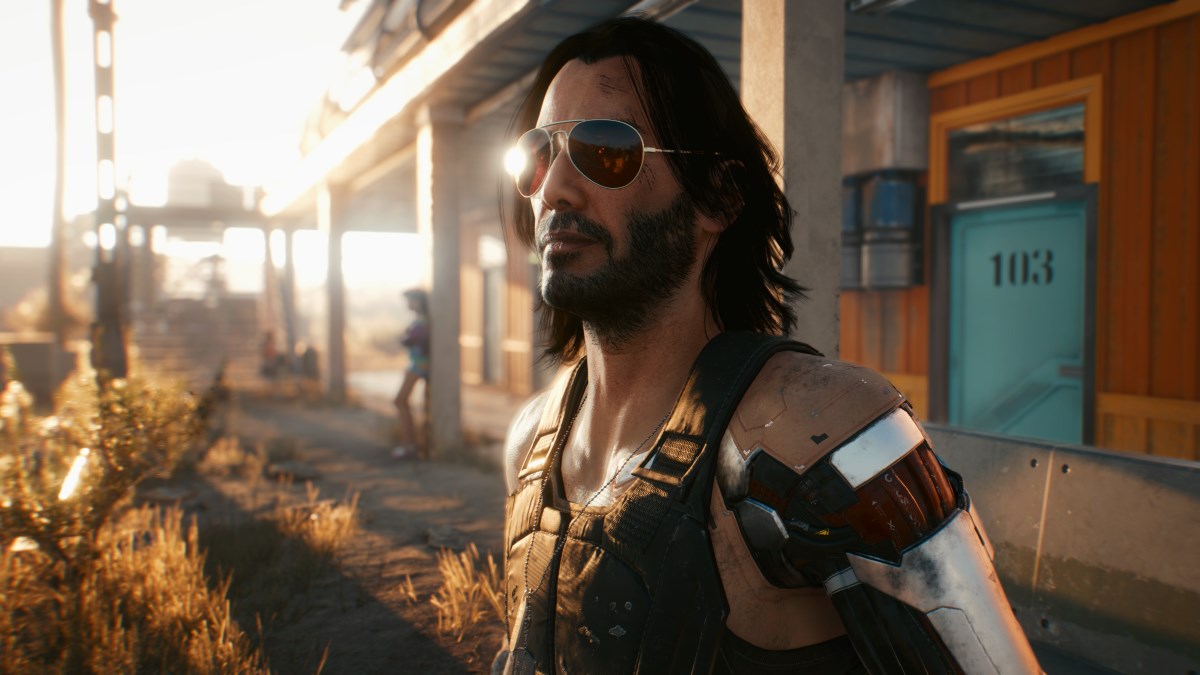 Night City is the quintessential melting pot, taking design influences from the West and the East — its populace is equally diverse as well — to create its world. It predictably lights up with a whole lot of neon at night, befitting the hallmarks of its genre that is also the title of the game. In Reeves, Cyberpunk 2077 has an actor who’s been involved with three of the biggest cyberpunk movies of all time, and the game includes some winking nods to his work in The Matrix. Night City is filled with things to do when you’re not busy saving yourself from turning into Silverhand. You can hunt for lost items or help steal items. You can be a hit man, aid the NCPD, clean up organised crime, or help put an end to an ongoing crime.

In terms of gameplay, you begin by picking one of three approaches in Cyberpunk 2077: hack your way through (“NetRunner”), be a gadget and Cyberware expert (“Techie”), or go all out with weapons (“Solo”). The game doesn’t bind you to these classes though, and as you level up, you can become a hybrid of two or more if you like. What you will actually be doing involves a mix of combat, timed puzzles, hacking computers or bodies, and analysing “BrainDance”, a virtual reality recording that captures audio, video, and thermal feeds. Cyberpunk 2077 has a variety of side activities on offer too, including the likes of boxing, racing, and shooting ranges.

The things you throw at enemies in Cyberpunk 2077, they can use against you too. This includes the ability to hack bodies, which opponents regularly deploy. The most common tactic is to heat your body up, which causes you to lose health. You can protect yourself by taking yourself offline but it’s an upgrade you have to unlock by levelling up.

Of course, for Cyberpunk 2077, allowing your body to be hacked is a way to pull you out of cover in combat and make up go hunting for the person who is hacking you. But even when you do want to fight from cover, it doesn’t go smoothly. Technically speaking, there is no cover system per se in Cyberpunk 2077. Instead, while you’re in crouch position — you can’t go prone, at least willingly — and walk behind a pillar, a big crate or something like that, you’re essentially in cover. But here’s the thing: since there is no cover button, V doesn’t dynamically adapt their crouch position to what they are standing next to. Hence, you’re at the mercy of the object’s height in front of you. If it’s not tall enough, you’re exposing your forehead to headshots. There are some other annoyances as well. Enemies can feel like bullet sponges, with even non-armoured opponents miraculously getting up after taking a shotgun pellet to the chest from a close distance. Stealth feels a tad unbelievable, for enemies will spot you — or a portion of you — but won’t even attempt to inspect what they just saw. Additionally, dialogue tree options seemingly function independent of each other. On more than one occasion, a non-player character (NPC) talked about something like we were discussing it the first time, even though that wasn’t the case. Speaking of NPCs, they are very noticeably repetitive. The same NPC model crossed me twice in 10 seconds, another kept going around in a loop, and two different NPCs behaved the exact same way at the same spot.

Lastly, there’s too much loot in Cyberpunk 2077, which doesn’t sound like a valid complaint, but really is, for a couple of reasons. Firstly, the pick-up system itself is a mess. It needs you to be so accurate and directly looking at something that I wanted to throw my controller. At times, items or bodies are positioned in such a way that it’s impossible to even access them. Even once you’ve the loot, Cyberpunk 2077 doesn’t auto equip the best stuff (there are 12 categories to pick through) nor does it discard useless items. There’s no way to batch discard items either, you’ve to do it manually. You can disassemble loot you don’t need for parts, or you can sell it for cash (EuroDollars, as the currency is called). And because there’s so much loot, inventory management becomes an activity in itself, and takes up too much of your time.

There’s nothing too special about anything that Cyberpunk 2077 offers; nothing especially that deserves the amount of hype and attention that has been cast in its direction. But what makes it all the more disappointing is the terrible package it’s being offered in. The PlayStation 4 and its counterpart, the Xbox One, have sold over 160 million units combined so far. Some of the gamers who pre-ordered would have a PS4 Pro or an Xbox One X, but many of them have the base versions. It is entirely unacceptable that performance on current-gen consoles is so poor, despite several release date delays. What that proves is that CD Projekt Red has rushed its release. Not a single soul should have to pay full price for this debacle. At least not until the developer proves that it’s fixed everything.

The era of the PlayStation 5 and the Xbox Series X has arrived, but Cyberpunk 2077 is currently running on those next-gen platforms via backwards compatibility. A true next-gen update isn’t due until sometime in 2021. That means CD Projekt Red developed a game for three platforms, and it’s running on an acceptable level on just one (PC), provided you have the hardware. That is just plain ridiculous.

Gadgets 360 played Cyberpunk 2077 on the PlayStation 4 Slim. The game is available worldwide on PC, PS4, Stadia, and Xbox One. It is also playable on PS5 and Xbox Series S/X.