The iHome TimeBoost combines a bedside alarm clock with a wireless charging pad that adds complexity to both with no discernible benefit to the user.

Bedside alarm clock radios have been around for decades, and iHome hoped to reimagine the concept with wireless charging and a Bluetooth radio. These things combined should create a unified device that’s easy to use, but the TimeBoost missed the mark.

Like many modern alarm clocks, the TimeBoost can automatically set its time using its radio signal. In addition, a switch on the rear of the device lets you choose if daylight savings time is in effect or not.

Those who want to set the clock manually can do so by pressing the clock button on the back of the device. Then time can be set using the plus and minus buttons on the top. 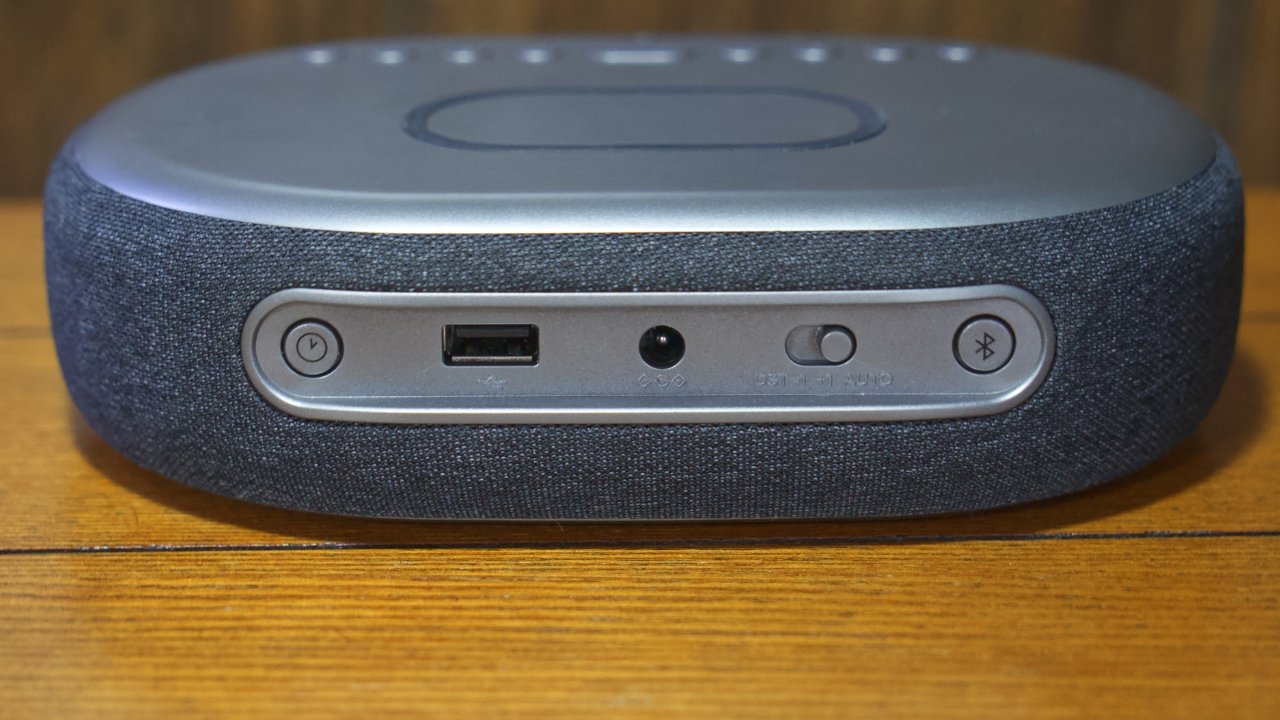 The Bluetooth button on the back places the TimeBoost into pairing mode with a single press. A voice announces that the pairing mode is on, and if a device connects, it says so too.

You can set the alarm using the two alarm buttons on the top. Press and hold an alarm button to set up the alarm, choose an alarm time, if it alarms on weekends, weekdays, or every day, and pick if it uses the Bluetooth device as the alarm sound.

Users can also select between four tones built into the alarm clock. These are not normal alarm clock sounds but rather alternative noises, such as guitar riffs or tolling bells. If the TimeBoost cannot connect to your phone for audio, it will automatically switch to a default alarm tone.

After setting up the Bluetooth connection and alarm, the TimeBoost should function as a simple alarm clock. When the alarm is going to sound, it will play audio from the last known source on the iPhone. This means that whatever music or podcast was previously playing will act as the alarm sound.

Without an app to control specific settings for the TimeBoost, users are left with little control over what will play. Rather than using software of some kind to select alarm tones or music, the TimeBoost connects to the iPhone and plays whatever happens to be cued up. 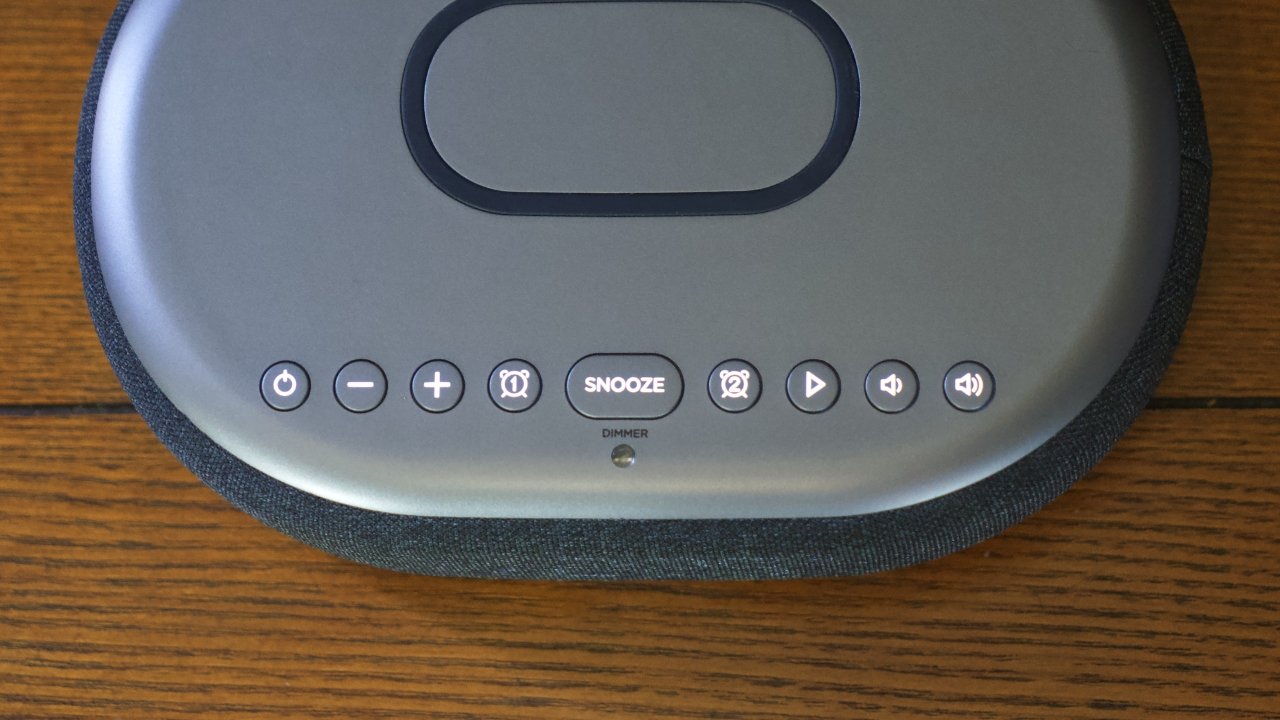 We found that the TimeBoost has trouble connecting to the iPhone every time an alarm sounds, so it ended up playing the default tone more often than not. This experience may vary from person to person but adds to the frustration of using such a device.

The TimeBoost includes a wireless charger for your iPhone. This provides a standard Qi charging rate overnight, but since it isn’t MagSafe, your device is just lying on the smooth plastic surface with no magnetic grip.

The snooze button is small and requires some awareness when pressing to stop the alarm from sounding. To disable the alarm altogether, users must press the corresponding alarm button on either side of the snooze button, which are even smaller targets still.

When waking up to an alarm clock, it is difficult to accurately hit the snooze button without looking directly at the clock. This leads to knocking the iPhone off of the charging pad with relative ease. Since the surface of the alarm clock is smooth, the iPhone can slide off the side with little force.

Should you buy the iHome TimeBoost? 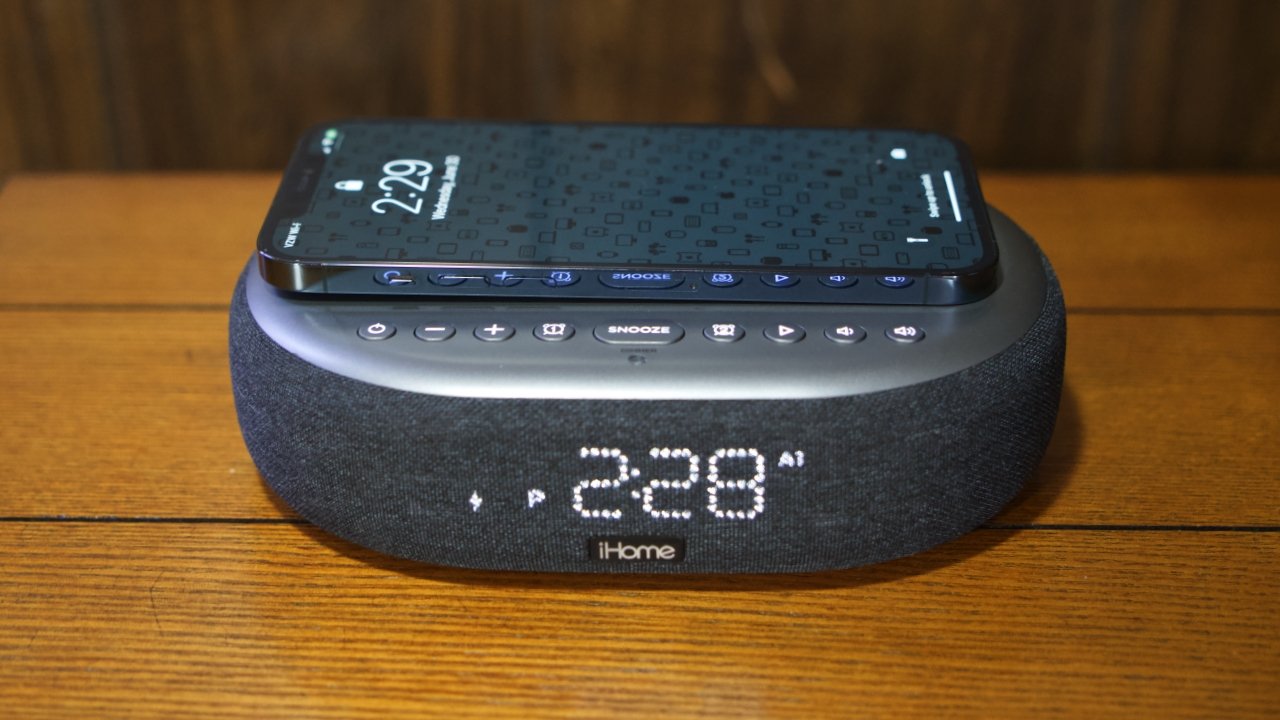 The iHome TimeBoost is fine when it works, but there are likely better options for the price

For customers to consider buying a device like the iHome TimeBoost, it should offer some useful features or replace something. Unfortunately, in our use, we found the TimeBoost didn’t do either.

The iPhone already works great as a standard alarm clock. On its own, the iPhone is loud, has simple controls for setting alarms, and is easily silenced.

TimeBoost works as an alarm clock and Bluetooth speaker but doesn’t do either well. The speakers in the alarm clock can get loud, but the quality is lacking for something of its size and price.

As an alarm clock, the TimeBoost is consistently frustrating. It fails to connect to the iPhone to use a song for the alarm sound most of the time, so users are left hearing the strange default alarm tones.

For a few dollars more, an iPhone owner can buy the HomePod mini to use with the iPhone as an alarm speaker, not to mention the dozens of other features the device offers. Unfortunately, the speaker quality and alarm features of the TimeBoost are not selling points of the device, especially at that price.

The price of the TimeBoost seems to be dependent on the wireless charging pad since other alarm clocks with Bluetooth radios are half of the price or less. The wireless charging experience is subpar since the iPhone can easily be knocked off the side when silencing an alarm, and a simple misalignment will mean the device doesn’t charge at all.

A lip on the edge of the device or a better rubber pad to grip the iPhone could have solved the wireless charging issues. Instead, iHome used a smooth plastic surface and a small ring to indicate where to lay the device.

Customers interested in the iHome TimeBoost can purchase the alarm clock from Amazon for $69.99.

July was anything but its usual quiet self in 2021, and if Apple released very ...