Apple has released iOS 13.4 and iPadOS 13.4 as the latest software versions of its iPhone, iPod touch, and iPad users. The new software builds bring support for iCloud Drive folder sharing as well as include nine new Memoji stickers. There are also various additional changes on board. Alongside the new iOS and iPadOS updates, the Cupertino company has brought macOS Catalina 10.15.4 for Mac users with the similar iCloud Drive folder sharing that has been provided to iPhone, iPod touch, and iPad users. There are also watchOS 6.2 and tvOS 13.4 updates.

One of the major changes that Apple has provided through iOS 13.4 and iPadOS 13.4 is iCloud Drive folder sharing support. This can be accessed directly from the Files app and works similar to how you can share folders using cloud services such as Box, Dropbox, and Google Drive.

The anticipated iCloud Drive folder sharing support comes with controls to let users limit access only to certain people who have been invited explicitly or grant access to anyone with the folder link. There are also permissions to allow changes and file uploads for some people while others will be able to only view and download files from the shared folders.

Apple has also provided nine new Memoji stickers that include a Smiling Face with Hearts, Hands Pressed Together, and a Party Face. The Mail app has also received always-visible controls to delete, move, reply to, or compose a new message in a conversation view. Further, responses to encrypted emails are automatically encrypted when you have configured S/MIME. 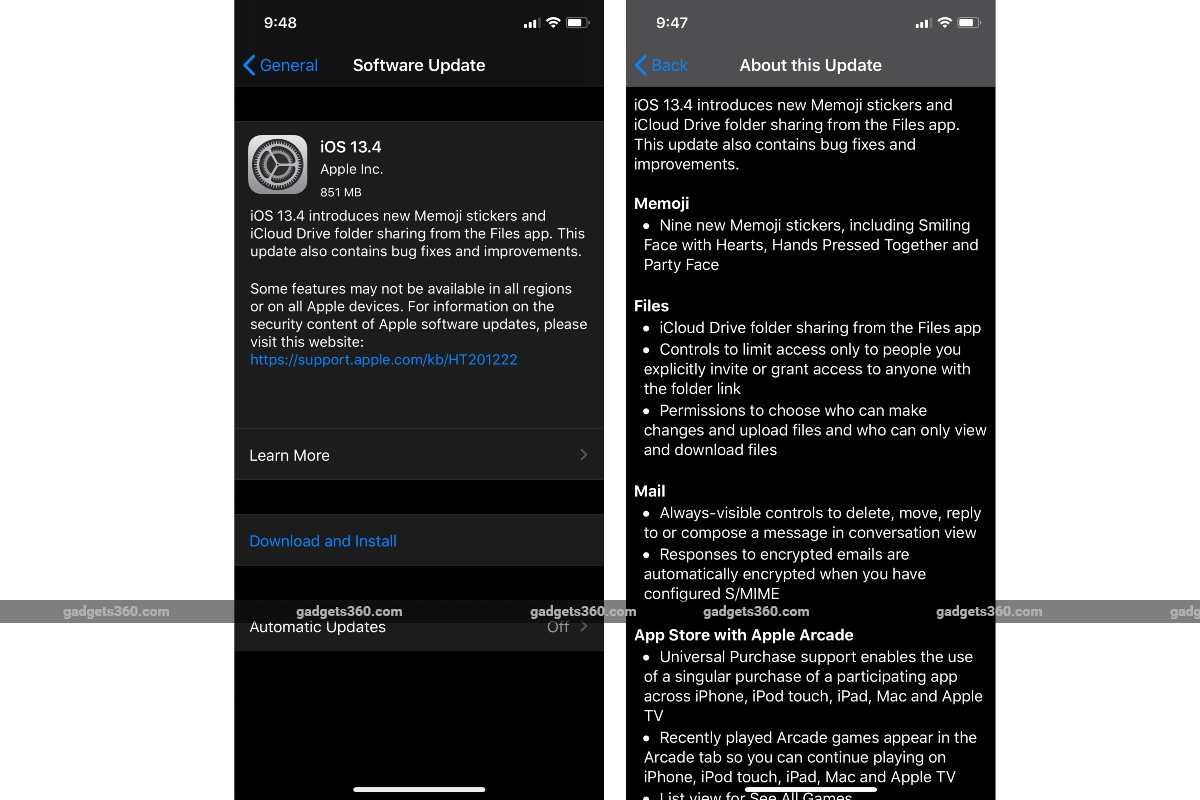 iOS 13.4 has been released for compatible iPhone models

Specifically for iPad users, the latest iPadOS update brings mouse and trackpad support. Mouse support notably isn’t something fresh for iPad devices since it was originally introduced with iPadOS 13.0. However, the new update brings several improvements on top of the original release.

Apple unveiled its Magic Keyboard accessory while launching the 2020 iPad Pro models last week. The new iPadOS update brings its compatibility to older iPad models. This means that any iPad model running iPadOS 13.4 will be able to work with the Magic Keyboard. There is also support for Magic Mouse, Magic Mouse 2, Magic Trackpad, Magic Trackpad 2, and third-party Bluetooth and USB mice. The update also brings multi-touch gestures through supported peripherals.

Apple has also offered Safari 13.1 through the latest iOS and iPadOS versions that includes full third-party cookie blocking. It was previewed in previous Safari and operating system beta versions to make webmasters and developers ready for the change.

The Wallet app that comes alongside the latest software update adds support for AliPay alongside the existing Apple Pay integration.

You can also expect tons of bug fixes and performance improvements. Further, the fresh updates also include security-focussed changes that are detailed through a dedicated webpage.

You can check the availability of the update on your iPhone, iPod touch, or iPad device by going to Settings > General > Software Update. Make sure that your device has a sufficient amount of battery and is connected to a Wi-Fi network.

Similar to the latest iOS and iPadOS versions, macOS Catalina 10.15.4 also brings iCloud Drive folder sharing support that can be accessed through Finder. The update also brings Screen Time communication limits that help you limit the control who your children can communicate with. You can also control the playback of music videos for your children. 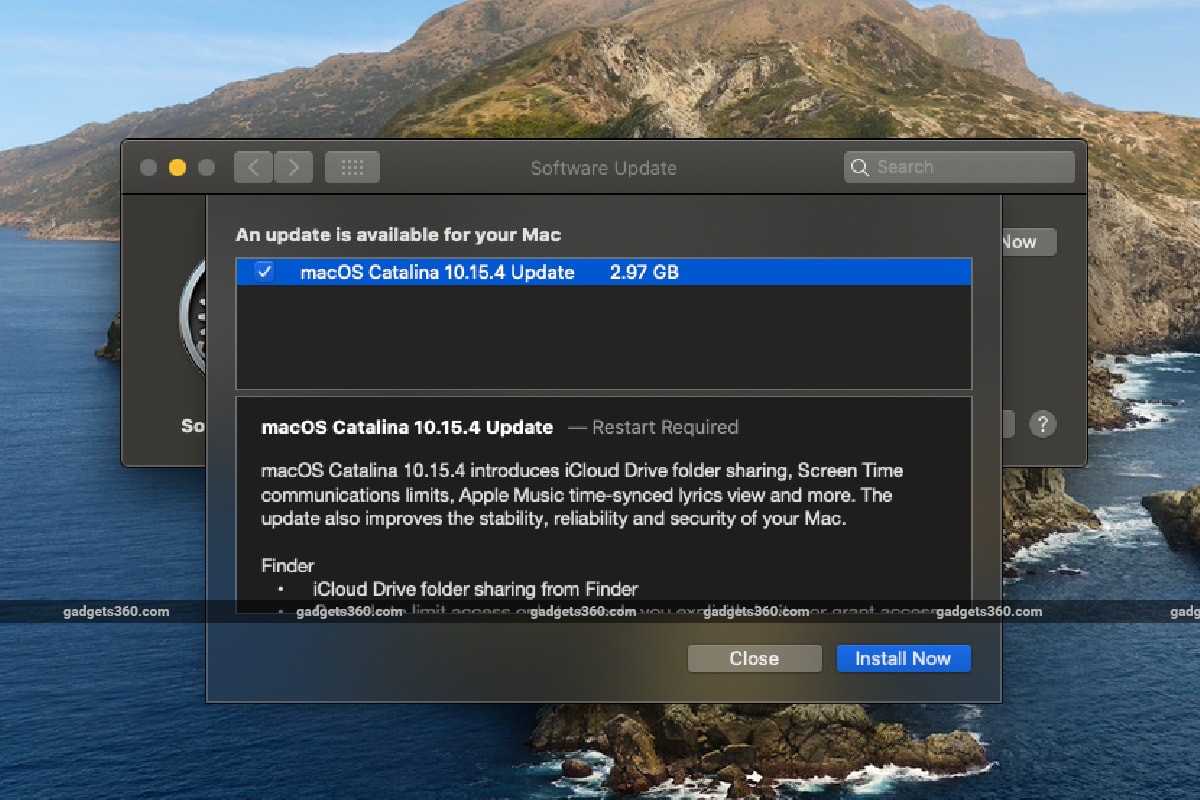 The new macOS update also includes updated Apple Music app with a time-synced lyrics view. You’ll also get a new Safari version with the option to import your Chrome passwords into iCloud Keychain and controls for duplicating tabs and closing all active tabs. Furthermore, there are various bug fixes and performance improvements as well as a list of enterprise content.

You can download macOS Catalina 10.15.4 on your Mac machine by going to System Preferences > Software Update. A screen will emerge on your screen to provide the details of the update. Moreover, the new version is compatible with the devices supporting macOS Catalina 10.15.

Apple has also brought watchOS 6.2 for Apple Watch models. The new watchOS update introduces in-app purchases for Apple Watch apps. This is an extension to the earlier dedicated App Store support that was a part of watchOS 6 released last year. The new software also fixes an issue that could have impacted music playback when switching from Wi-Fi to Bluetooth connectivity.

The latest watchOS release also brings the ECG app on Apple Watch Series 4 and later in Chile, New Zealand, and Turkey. These three markets have also got support for notifying irregular heart rhythm.

You can look at the security content of the update by visiting the dedicated webpage maintained by Apple.

The watchOS 6.2 is compatible with Apple Watch Series 1 and later. You can download the update by going to the My Watch tab on the Watch app available on your iOS device and then visiting General > Software Update. Alternatively, you can get the new update directly from your Apple Watch.

To download tvOS 13.4, you need to open the Settings app and then go to System > Software Update. You don’t require to follow any certain steps if you’ve already enabled automatic updates on your device.

Apple Lifts Purchase Limits on Its Products Outside China