Last Monday, Sunaina, who’s in her final year for the Master of Arts programme in Social Sciences at the University of Delhi, was sitting in front of her computer to appear for her online exam. The question paper for the exam was supposed to be uploaded on the university’s dedicated portal at 9:30am. However, the portal at that time showed a message saying, “no exam scheduled for today.” Sunaina was ultimately able to receive the question paper only through some of her friends over WhatsApp at 9:45am. Though she was doubtful of its authenticity, she began writing her answers since she was losing on time.

“By 10:45am, the university emailed us ways to procure the question paper, but it was all hassle at this point,” Sunaina said.

After completing her exam, she came back to the university’s portal to upload her answer sheet. But it wasn’t ready to accept answer sheets from students even until 1:30pm — the time at which students were required to submit their answers. She then ended up emailing her answer sheet to one of the given email addresses.

Sunaina isn’t the only student of the Delhi University who faced issues while appearing for its online exams, which the university calls Open Book Examination (OBE). In fact, there are hundreds of students complaining about similar technical problems on social media. Gadgets 360 spoke to many of these students, whose names have been changed to protect their privacy. These stories highlight the unique challenges students are facing in 2020, and how India is struggling to cope with the challenge of a fully digital education system.

Coronavirus: As Schools Switch to Online Education in India, Who Gets Left Behind?

Delhi University is the first public institution in the country to start hosting online exams during the coronavirus outbreak, though a few other Indian universities are also planning to embrace a similar model in the coming days. It received a nod from the Delhi High Court earlier this month to begin with the OBE mode for final-year students after cancelling regular exams due to the pandemic and postponing online exams scheduled earlier for July 10. The first exam was conducted on August 10 that resulted in several technical glitches.

Crashing of the university’s portal was one of the biggest issues reported by several students and parents. However, many other problems were also found in the model that could have emerged as a reference for other institutions and universities in the country.

My daughter took her first #DelhiUniversityOnlineExam. The site crashed. She submitted to her college. Pathetic show by university and I can only sympathise with students with poor net connections unlike our home.

Same with my younger sister!

I had uploaded my 3 answers by 11, then I tried to upload my 4th answer at around 11:25, and it got uploaded at 11:30 but when I tried to submit it, I was redirected to homepage. At the homepage it was showing my exam has not been submitted. And now I got a mail from DU that 1/3 pic.twitter.com/9I1Ngd7yyj

Websites-related problems aren’t new for Indian students as similar issues are quite common when the results of secondary and senior secondary school exams are being announced in the country. Just in July, the website of the Central Board of Secondary Education (CBSE) was affected by a technical issue that made students wait for hours to see their results online.

M Sasikumar, Executive Director at the Centre for Development of Advanced Computing (C-DAC), said that while it’s difficult to give an exact answer of what caused an outage, load-bearing capacity was the more likely cause in case of the Delhi University or CBSE sites.

C-DAC, a research and development (R&D) organisation of the Ministry of Electronics and Information Technology, conducts various online training programmes and exams in the country. It is also a scientific body that helps the government expand in the fields of blockchain and build new models of e-learning.

“If auto-elasticity is built in, the system may add more servers as the load builds up,” Sasikumar told Gadgets 360. “Many websites rely on manual intervention here, though. People also have a tendency to cluster access on specific points, for instance, within minutes of results being announced or on the last day of application for an examination.”

Having said that, apart from the crashing of the website and issues related to uploads on Delhi University’s portal, even the email address of its grievance cell ([email protected]) was found to be unavailable at the initial stage. This was also pointed out by the Delhi High Court in one of its recent orders. A student also shared a screenshot showing the unavailability of the email address with Gadgets 360. 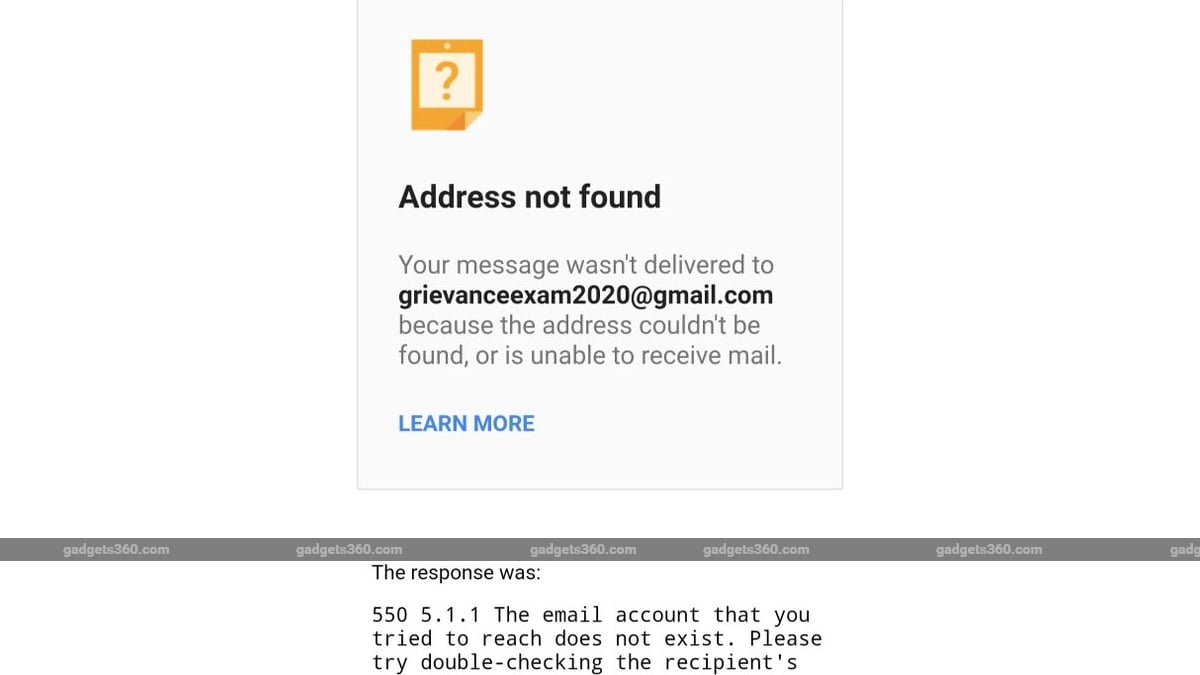 Some students appearing for the Modern Political Philosophy exam on Friday complained that they were initially given a question paper that was made for the mock test and was 45 minutes after the exam was started. The university even asked the students to change the unique paper code (UPC) on their answer sheet as per the new question paper provided to them. However, after the issue raised by some professors, it was later decided to retain the existing UPC.

“The university conducted four phases of mock OBE to train the students and to improve their system,” Advocate Akash Sinha, who’s a counsel for the students filing a petition against the OBE model in the Delhi High Court, told Gadgets 360. “However, each subsequent phase was an even worse outing for the university.”

Sinha also pointed out that the current model involved serious issues of privacy, handling of sensitive information, and storage and sorting of answer sheets of the students, which are being collected via both the university’s portal as well as through emails.

“It’s going to be a nightmare to sort and store relevant information as chances of redundancy is extremely high because some students are uploading answers both on the portal as well as through the given email addresses,” he underlined.

But nonetheless, Delhi University released a press statement last week that claimed the initial success of its online examination model.

Widening education inequality
Since Delhi University is a renowned public central university in the country, a large number of students come here from different states and regions and belong to distinct social classes. Thus, the model of conducting online exams isn’t feasible for all students.

Azam is one of those students. He moved back from the university’s hostel to his home in Kashmir last month after his final year exams were postponed due to the pandemic. But due to only having 2G connectivity in the region, he isn’t able to quickly access his emails or WhatsApp messages.

“The 2G networks here has made it quite difficult for students like me to appear for online exams — no matter whether the university’s portal is working or not,” he told Gadgets 360.

Similar to Azam, Debolina, who’s in her final year of the Master of Computer Applications (MCA) programme at Delhi University, went to her home in Meghalaya after seeing the postponement of her exams. However, she’s facing lack of electricity and Internet connectivity in her hilly state and finding it quite difficult to appear in online exams from her home.

“I feel defeated as a student not because we have to do the OBE exam but because when we do have a problem related to it, the university is not willing to either aid us through the process or express its concerns towards its students,” she said.

The university engaged with the Common Service Centres (CSC) scheme by the Minister of Information and Technology (MeitY) to help students like Azam and Debolina. However, some students said some CSCs in the country weren’t even notified about the exams.

“I personally called up CSCs near my area [in Delhi] to see if they were notified by the university, but the claim of CSCs turned false as most CSCs were closed and none of them had received any official notification,” said Arpita, one of the students pursuing Economic Honours from Delhi University.

These weren’t the only problems of access either. Sumit Kataria, the President of Delhi division of left-wing student organisation Students’ Federation of India (SFI) told Gadgets 360 that in some cases, visually impaired students didn’t receive a scribe — a person that helps visually challenged students write their exams. The university, however, said in a notification that it had made a provision for requesting a scribe.

“It’s not possible to conduct exams online in any situation as the current model of online examination involves several technical problems,” said Kataria.

Delhi University’s Assistant Professor Meenakshi Chawla told Gadgets 360 that she and her fellow professors were helping students at all levels. “With the technology, with which we were not very comfortable, we are trying to be comfortable because at this moment, we don’t have any other options,” she said.

However, some students disagreed with what the professor said and noted that the university and teachers didn’t care about students and their future.

“Because they just want to prove that they can conduct exams even in these disturbing times, they don’t care what a student is learning and where the student is currently,” said Prabhjeet, a final year student of the university.

Experts see the ongoing issues with online exams conducted by Delhi University as a learning for all universities in India. However, at the same time, some believe that the universities in the country should defer the exams altogether and promote students on the basis of their existing performance. This model exists in Delhi University as well — but not in case of students who are in their final year.

Director of the Centre for Equity Studies Harsh Mander said that evaluation-wise, our education system shouldn’t allow one group of students to move forward and the others to be left behind — irrespective of technical challenges and technological problems.

“Our education system in any case reflected enormous inequality,” he told Gadgets 360. “But what this moment has done is it has even brought an excessive gap to that inequality.”

Should the government explain why Chinese apps were banned? We discussed this on Orbital, our weekly technology podcast, which you can subscribe to via Apple Podcasts, Google Podcasts, or RSS, download the episode, or just hit the play button below.