Samsung Galaxy Tab A7 has been spotted on Google Play Console, revealing key specifications of the tablet and hinting at an upcoming launch. The listing shows that the Samsung Galaxy Tab A7 will be powered by the Qualcomm Snapdragon 662 octa-core processor, something that was also tipped in a Geekbench leak. The Google Play Console listing suggests that the tablet runs on the Android 10 operating system and that the resolution of the display is at 1200×2000 pixels. 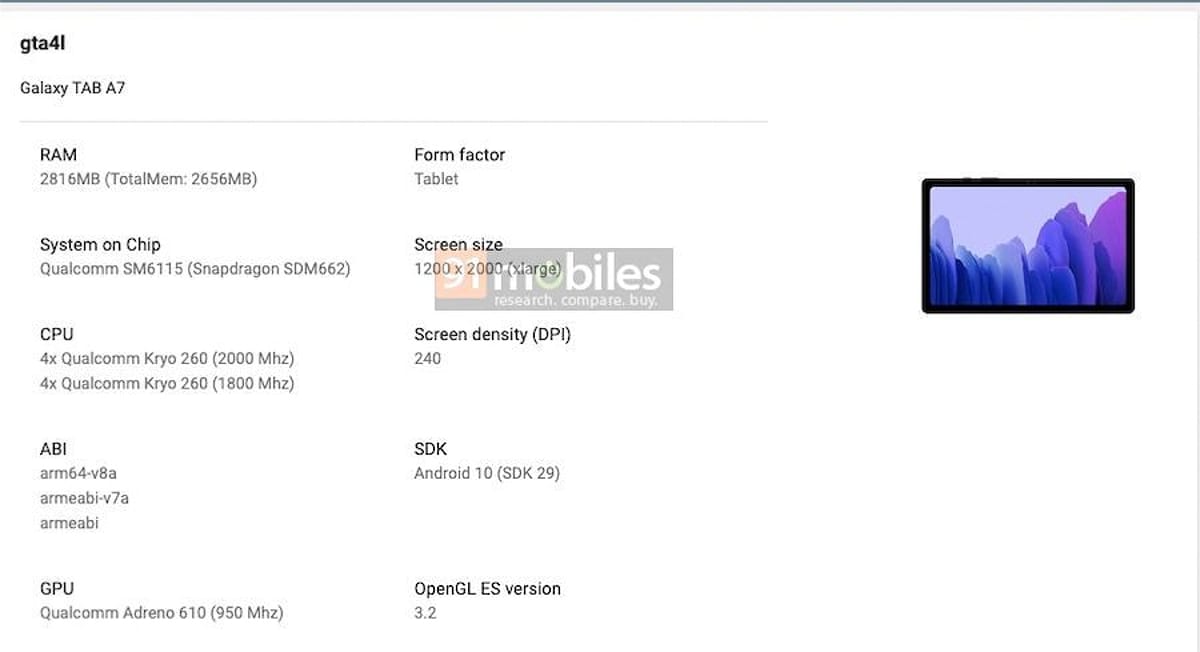 Samsung Galaxy Tab A7 launch date is not known yet
Photo Credit: 91Mobiles

As mentioned, the Google Play Console listing also suggests that the tablet runs on Android 10 and has a 1200×2000 pixel resolution display. The source code further reveals that the Samsung Galaxy Tab A7 may feature a 10.4-inch display and come with 32GB and 64GB storage options. The Android d10 software should see One UI tweaks on top. There is an image that is also attached with the Samsung Galaxy Tab A7, and it suggests equal bezels on all sides of the display. The physical buttons are seen on the right side of the screen. This could well just be a placeholder image, and the actual Samsung Galaxy Tab A7 may be a whole lot different.

Is Mi 10 an expensive OnePlus 8 or a budget budget S20 Ultra? We discussed this on Orbital, our weekly technology podcast, which you can subscribe to via Apple Podcasts or RSS, download the episode, or just hit the play button below.

Alcatel TKEE Mini, TKEE Mid, and TKEE Max tablets for kids have been launched by ...