Sony’s camera division has had a pretty eventful first half this year in India. From launching its latest action camera, the RX0, to announcing the sixth edition of its highly popular point-and-shoot camera, the RX100, the company has shown no signs of slowing down. Earlier in the year, we also got a refresh of the famed Alpha 7 or A7 line of full-frame mirrorless cameras, called the A7 III.

This third iteration comes nearly three years after the A7 II was launched in 2014, and it’s considered to be the ‘basic’ model in Sony’s full-frame lineup. Last year, the company refreshed its other series that specialise in high-resolution photography (the A7R III) and introduced a new flagship full-frame camera called the A9 that’s geared for speed. The new Sony A7 III is designed to offer a balance of video and still photography features at a more approachable price point. Let’s take a look.

The Sony A7 III has a design that’s similar to its more expensive cousins. The magnesium alloy body is fairly light but also ensures durability for long-term use. The outer covering of plastic and rubber feels premium, and the hand grip is of a comfortable size. The body is also designed to resist dust and moisture. 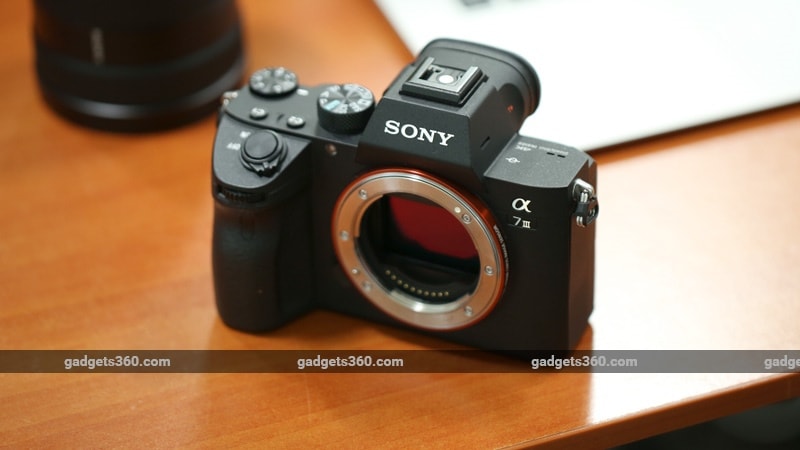 You get a good number of customisable buttons (C1-C4) that are spread out across the back and top panels. Besides these, you can also remap the functions of the labeled shortcut buttons, giving you more flexibility. We liked the placement and feel of the buttons, which have a soft tactile response and don’t make any sound. You also get a jog dial at the back for shifting the focus point. Alternately, you can use the touchscreen at the back to set the focus point, even when looking through the electronic viewfinder (EVF).

The Sony A7 III has no in-built flash, so you’ll have to use an external one through the hot shoe. It features two dials on the top, one to change shooting modes and another for exposure compensation. The 0.5-inch OLED EVF has a resolution of 2.3 million dots with a 0.78x magnification. The refresh rate is fixed and can’t be changed. Plus, the resolution is a bit on the lower side, so objects viewed through the EVF don’t look very sharp. You also get a tiltable 3-inch LCD with a 921K dot resolution and touch support for focusing and zooming in on your subjects. Brightness is good and we didn’t have any trouble using the screen under sunlight. 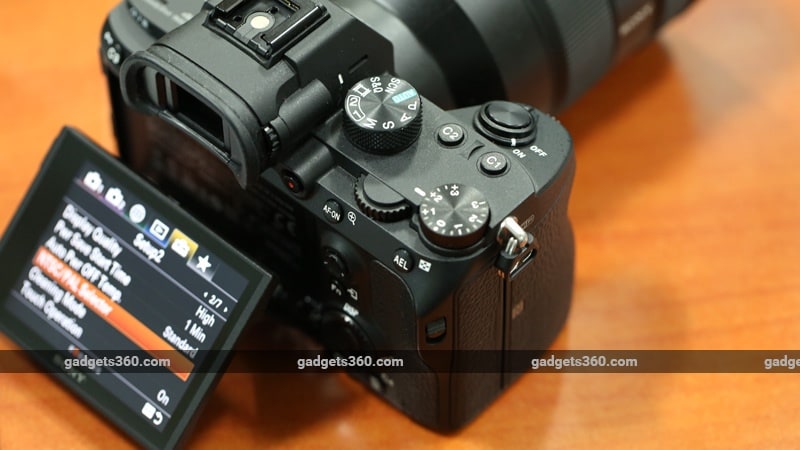 On the left side of the Sony A7 III, you have flap-covered microphone and headphones sockets, a Micro-HDMI port, a USB Type-C (USB 3.1 Gen 1) port, and a Micro-USB port. On the right of the camera, we have slots for two SD cards, of which only the first one supports UHS-II cards. There’s also an NFC chip for pairing with a smartphone. The A7 III uses a larger capacity NP-FZ100 battery which promises more shots per charge, when compared to the A7 II.

Sony A7 III features and specifications

Here is where we see many of the A9’s features trickle down to a lower price point. In the body of the A7 III, there’s a 24.2-megapixel full-frame Exmor-R CMOS sensor with 5-axis stabilisation. Just like the A9, the A7 III also gets 693 phase detection autofocus points, in addition to 425 contrast detection points, which covers nearly 93 percent of the image area. This is massive improvement over the A7 II, which had just 117 PDAF points and 25 contrast detection points.

The camera also has an impressive ISO range of 100-51,200 for both stills and video, and this can be expanded if needed. There’s 10fps burst shooting with AF/AE tracking, as well as a silent mode. Eye-AF is also present, which now works in the AF-C mode. During our testing, we found it to work quite well, at times even when our subject wasn’t looking directly into the lens. 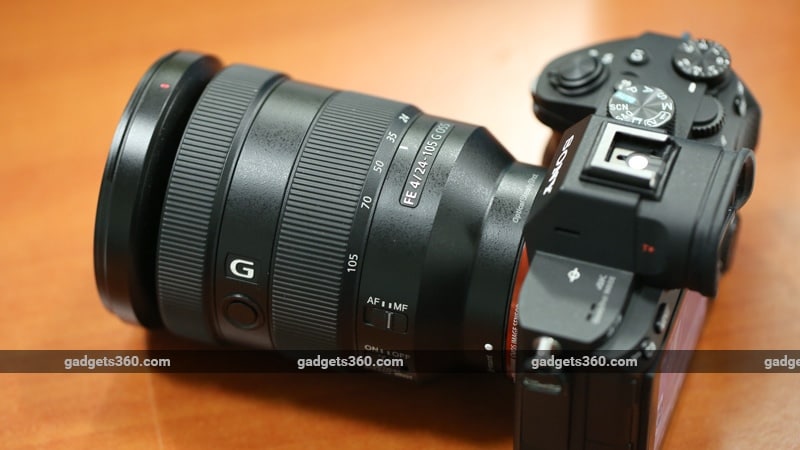 Video recording tops out at 4K at 30fps without pixel binning, which means that video is recorded at a higher resolution and then downsampled to 4K. You also get advanced shooting modes like S-Log and HLG (which can be selected from the Picture Profile sub-menu) for creating HDR content or simply allowing advanced grading in post-production.

The Sony A7 III has single-band Wi-Fi 802.11 b/g/n, Bluetooth 4.1, and NFC for pairing with a smartphone. The pairing process takes some figuring out and isn’t exactly seamless. You have to choose the type of connection you wish to make from the camera menu (remote shooting or viewing images) and then use the Play Memories app to complete the process on your phone. You can choose to copy original or resized images to your phone, but this transfer can’t be automated like how Nikon does it with SnapBridge.

Sony’s menu system is fairly easy to deal with. The settings are grouped under five main categories: Image, Movie, Network, Playback, and Setup. You can dive right in to the desired section depending on what you’re looking for. You can also add items that you use frequently to a sixth tab called My Menu, for quick access.

In our ISO test, we check to see how well a camera handles noise at high ISO levels. ISO adjustments can be made in half and one-third stops so you can really fine-tune the level. An expanded range is also available, which boosts the ISO level all the way to 2,04,800 but as you can tell by the shot below, it’s not particularly useful. With the native range, detail level is preserved very well till about ISO 6,400. There’s barely any discernible difference up to that point. 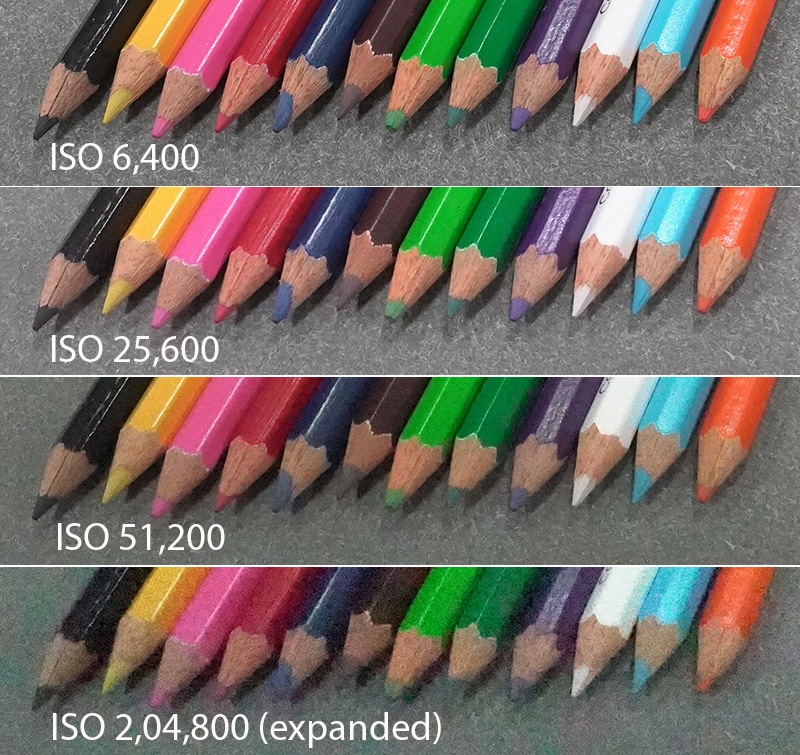 At ISO 12,800, a bit of noise is visible, and it’s a lot more evident as you go a stop higher to ISO 25,600. The edges of the pencils start to blur a bit here. At the highest native ISO level, details get quite mushy, making the image somewhat unusable. Compared to the Panasonic Lumix GH5S which can also reach ISO 51,200, we feel that the Sony fares a tad better.

For our tests, Sony sent us its recently launched FE 24-105mm F4 G OSS lens {Rs. 1,09,990), which features switches for auto/manual focus and Optical Steady Shot. There’s also a focus hold button between the zoom ring and the focus ring. The lens is pretty versatile for a variety of shooting styles, but it weighs around 663g on its own.

Under good light, the Sony A7 III captures some really stunning images. The level of detail is excellent, and we didn’t have any issues with chromatic aberration. The lens does tend to distort objects on the side of the frame a bit, but this isn’t very apparent until you really do a tight crop or go looking for it. Colours are punchy and well saturated, with good dynamic range. 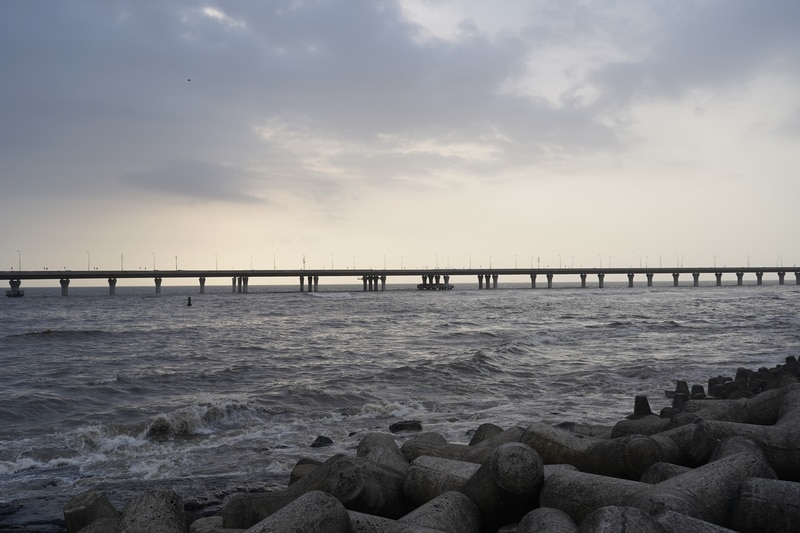 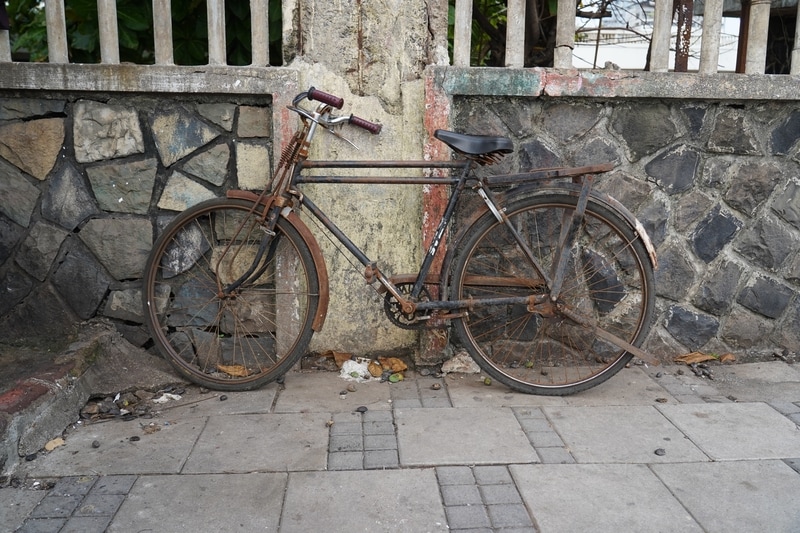 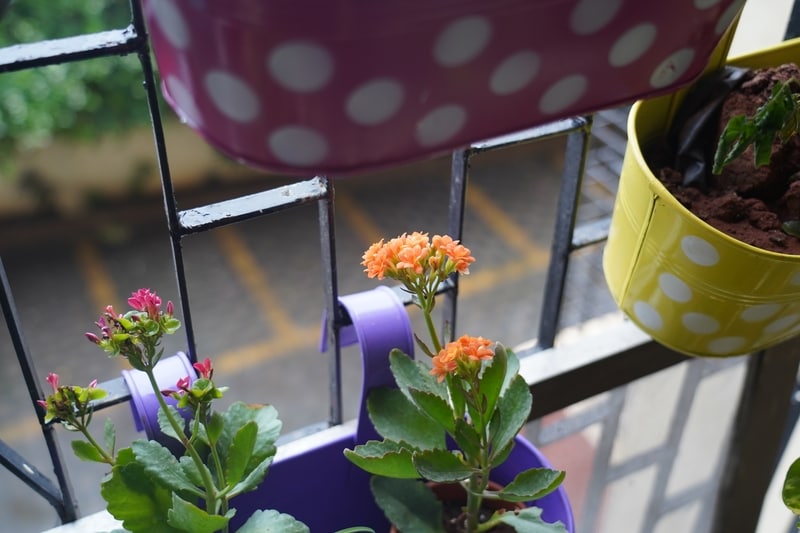 Thanks to the multitude of autofocus points, little effort is needed to lock on to your target. With moving objects, the A7 III easily keeps the focus locked onto your subject when you’re panning and shooting. Face priority works well too, and is useful when you want to focus on human subjects.

In macros, the full-frame sensor manages to capture punchy colours, albeit slightly boosted, and the details around the edges of a flower even at a 100 percent crop are sharp and well defined. You get a bunch of different focus modes such as Wide, Zone, etc, which are useful depending on the subject you’re shooting. Burst shooting works well too, with barely any blackout when using the LCD display or the EVF.

Low-light performance is very good, provided you keep the ISO level under 12,800. Noise isn’t much of an issue even at this level, however, finer details in landscapes begin to get a little blurry. Dynamic range is still good though, and the autofocus is still quick. The quality of 4K video is also good. You can shoot at a maximum framerate of 30fps at this resolution, but at a decently high bitrate of 100Mbps. 1080p videos can be shot at up to 120fps. 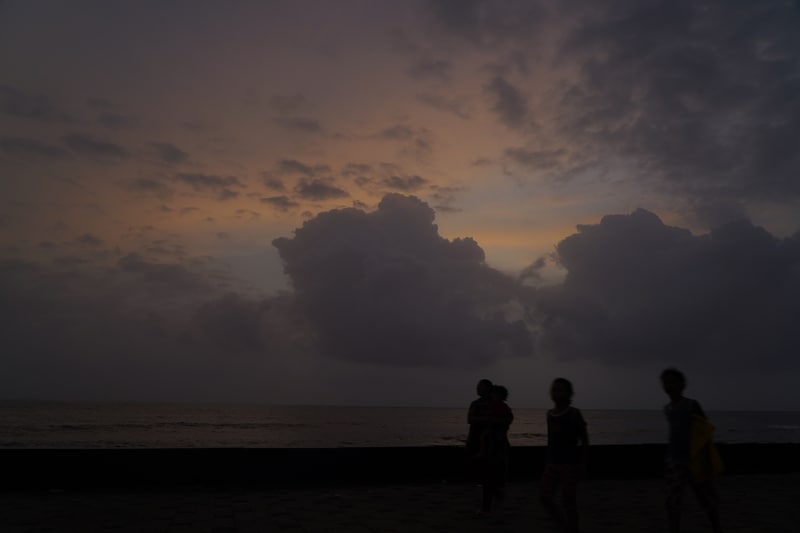 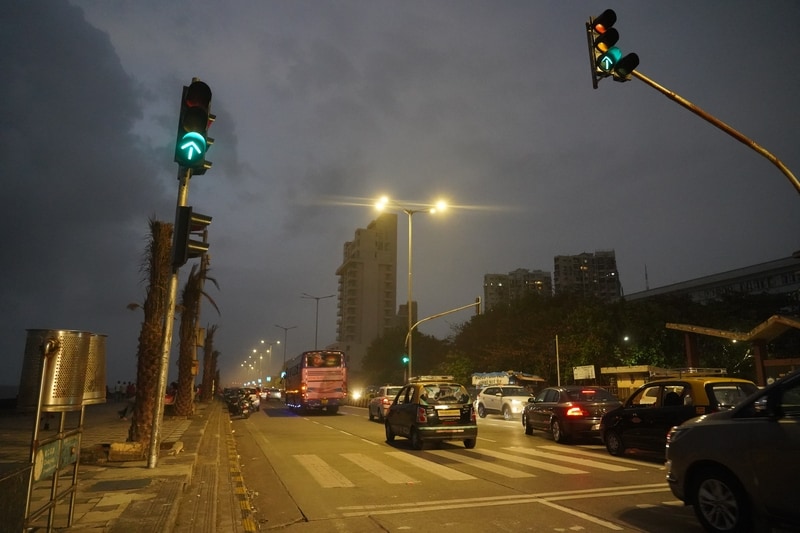 Quality is good, even in low light, and the touchscreen lets you pull focus between different subjects quite easily. You can also adjust the rate at which the focus shifts in the settings, which is handy. If you need to shoot ready-to-go slow-motion footage, the ’S&Q’ shooting mode on the mode dial helps you achieve this. Here, you can select a framerate anywhere between 1fps (quick motion) and 120fps (slow motion).

The battery is rated to deliver roughly 710 shots per charge when using the LCD. During our review period, we manage to come close to this claim, which is good, since our usage also involved a bit of video and lots of burst shooting. The camera can be charged via the USB port too.

Verdict
The Sony A7 III is a great entry point into the company’s full-frame range of cameras. If you’re an enthusiast or even a professional looking for a full-frame camera and want something portable, then mirrorless is the way to go. The A7 III is a huge step up from its predecessor in terms of processing power and features, and for its retail price of Rs. 1,64,990, it’s hard to find any other full-frame camera that comes close to its capabilities. TheSony  A7 III has excellent autofocus performance, captures quality stills, and shoots 4K video – all in a compact body. Some of the areas that could use improvement are the resolution of the EVF and the fact that the touchscreen cannot be used to interact with the menus.